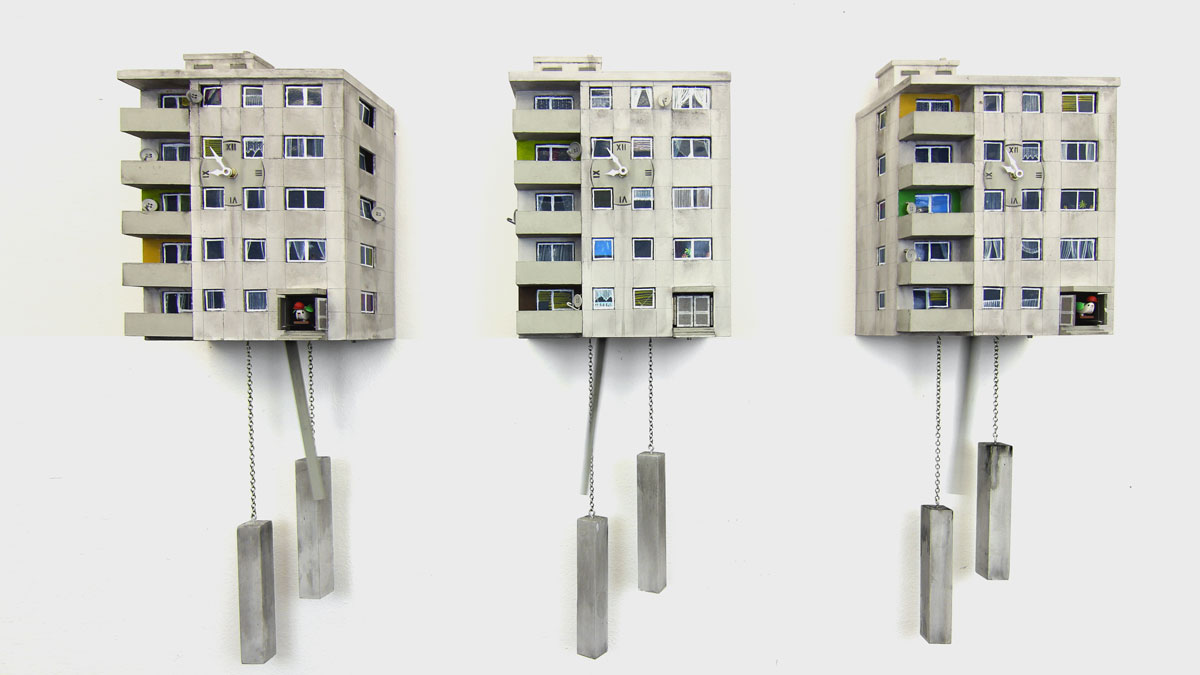 When a Cuckoo Block bird pops out on the hour, instead of tweeting his stale old tune, he belts out some J-Lo:

Cuckoo Block creator Guido Zimmermann began his career as a graffiti artist in Germany, moving on to mural artwork a few years later. Today, he's a freelance painter and artist, seemingly staying true to his graffiti roots with this stark, urban transformation of an ornate, bucolic classic.

Cuckoo Block designs include two types of architecture: known buildings with a rich history and social value, such as the clock modeled after Bauhaus architect Marcel Breuer's Hotel Le Flaine; and existing high-rise buildings Zimmermann has seen in cities he's lived in or visited, such as his Cuckoo Block Frankfurt, designed after an apartment building in his hometown. Both types of clock adhere to Zimmermann's theme of "massive concrete construction."

The only thing missing from this Return of the Jedi wall clock is an R2-D2 head that pops out on the hour to go, Bee-boo-boop-coo-koo! Otherwise, it's all there. Electroluminescent lightsabers and LED glow from within:...

I don't have an Apple Watch, so I don't need a NightWatch Magnifying Clock Dock for my Apple Watch. But. My mama has an Apple Watch. And, based on the imprints of a square with rounded edges and a little dial sticking...

First thing's first: if you want to see what's so special about Rhei, fast forward to 1:50 in the above video to bypass the dramatic buildup and jump straight to the action flow...

Nothing says it better than this Penny Clock from Fun Cool Wall Clocks: time is money...

The Etch clock engraves every minute of your day into stone. Figuratively speaking. Really it uses the trickery of 3D digital numbers and a colored elastic membrane to give the eye-catching appearance of chiseled time...

Dalibor Farny. Now that's a great name. I'm thinking of using Dalibor for the name of my next pet. That's how great I think the name is. Is that beside the point? Yes. What's right on top of the point then? That he makes...