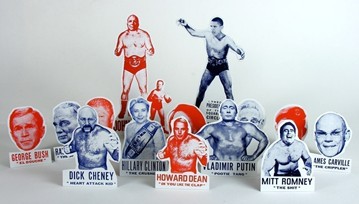 Condoleezza Rice recently appeared on The Daily Show with Jon Stewart to promote her memoir, No Higher Honor, and provide his liberal loyalists with fresh ammo for mocking her. Ms. Rice accomplished at least one of the two with the toothy, loveless telling of her first in-the-flesh meeting with Muammar Gaddafi. Apparently, Libya's favorite former militant ruler was also a Condi fetishist. So, after dispensing with the customary assalamu alaikums and high-fives, and the polite political banter tossed about for the benefit of the press, plus the small percentage of the American population that still thinks our government officials work for "the people", Gaddafi told Rice he had something to show her.

You're wondering if the item was in his pants, right? Indeed it probably was.

But what she told the Comedy Central viewing public that Gaddafi actually whipped out was a clip reel of Rice herself. Naked in her hotel room.

Just kidding. Interacting with various world political leaders, such as Vladimir Putin and Manny Pacquiao. And set to the tune of a ditty he had written for her, entitled "Black Rose in the White House". Slightly creepy, yet hilarious, right? Pretty, popular Condi Rice, the unwitting object of nerdy little Muammar's affections. How endearing and relatable. Makes you want to go out and buy her new book.

No? Then how about a Condi "Anacondaleeza" Rice Christmas tree ornament? Printed on recycled paper and available in assorted red and blue colors.

Thousands of decorative lights from the palm of my hand to the branches of my trees, or spans of my walls in minutes. Minutes. Without the hassle of knotted wires. Without the danger of ladders. Without the frustration...

Thrifty & Thoughtful: The Best Gifts for $25 or Less

I figured it would be tough to do a round up of gifts for $25 or less this year, but over the 12 months, I've actually posted dozens and dozens of pieces of tech and gear, tools and supplies, and trinkets and gadgets...

My picks for the 17 best Dirty Santa Gifts for 2020 sees Dirty Santa preparing to release the Kraken. Dirty Santa pleased to show off one set of nuts while cracking another. Dirty Santa showing a preference to butts over...

You can go all out Clark Griswold and National Lampoon's Christmas Vacation on your holiday decorating this year without risking falling off the roof or running up a thousand-dollar electrical bill. Just make yourself...

White Elephant Gifts for $20 or Less

Some relish the thought of participating in a white elephant gift exchange, envisioning the gags and pranks they'll pull, the equal parts hilarity and awkwardness that will ensue when the boss ends up with the Flowering...