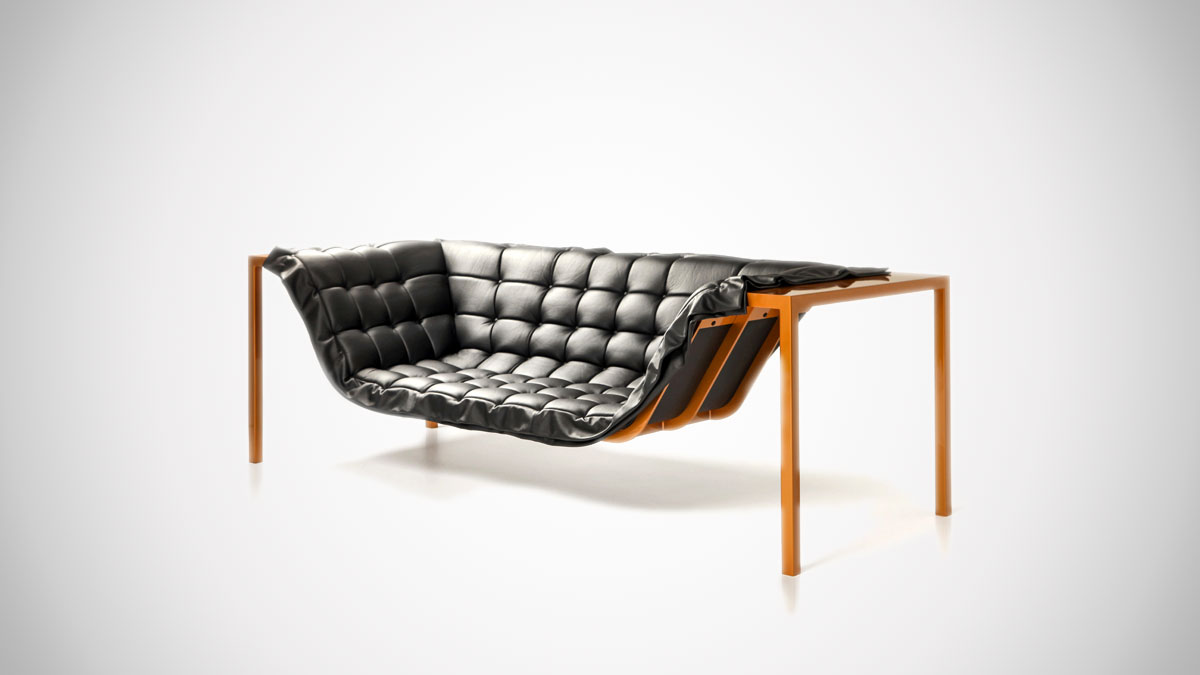 Harow goes on about how their Orbital Sofa takes inspiration from space stations, or orbital stations, and specifically the International Space Station launched in 1998. The sofa, plus its armchair version, supposedly pay tribute to the low Earth gathering place of astronauts from the US, Canada, Europe, Russia, Japan, and Brazil.

But Harow has also called this Orbital Sofa the Empire Edition, and upholstered it in imposing black leather whose shape mimics a pretty recognizable helmet, but not that of any astronaut on the ISS. Plus, Harow is also the design house behind the Arnold Schwarzenegger Iconic Stool, so they clearly respect Hollywood and pop culture as much as the scientific exploration of the universe.

Why not just call it the Vader Sofa? Or the Dark Lord Divan. The Empire Strikes Your Seat.

The Orbital Sofa and Orbital Armchair, Empire Edition are part of a limited run. Their structuring is a bronze / steel combination, and the puckered black seat part fabric and leather.

T3 and T4 are the unassuming names for the very standout Tetris-style couches Sara Hayat includes in her modular furniture collection. A pile of colorful tetromino cushions link together to form a clean, modern sofa...

No, designer Ubald Klug didn't really name this luxe couch the Rolls of Fat Sofa. This dude, the world's most cutting, yet fair, critic did. That's all I see when I look at it. Layers and layers of visceral fat. And...

This Boxing Glove Sectional Sofa is a sight to behold. A real trophy piece for a fight lover. It also looks about as comfortable as a left jab to the face from Ali...

We're already working, grocery shopping, and ordering piles of sweatpants and 3-course dinners without leaving home. The Couch Console proposes taking things a step further: do it all without leaving your couch. Containing...

The Flez 2 is a modular sofa design from Nick Potter. Backless, armless triangular seat cushions sit on similarly-shaped wood bases, allowing loungers to use the segments individually, or push them together to form squares...

I've slept on my sofa for the past 2-1/2 years. I've even slept in my sleeping bag on my sofa. But until now the two were not a happy combination, as the outsides of sleeping bags are slippery, and the heights of sofas...

And you thought you'd never find the perfect gift for Medusa and Voldemort. The Boa Sofa was designed by brothers Fernando and Humberto Campana, and I just wonder what this snaky, sultry joint venture says about their...