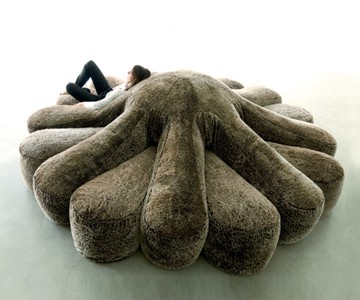 Really this couch is called the Aster Papposus Sofa, but who knows what the hell an aster papposus is? I can't even pronounce those words together, and have just resorted to reading them as Snuffleupagus. To whom the couch also bears a vague resemblance. So that's the first thing. I gave it a new name. I selected Octopus Couch because it appears to have 8 tentacle-y arms cascading from its spherical center.

The second thing is that it was designed by the Campana Brothers, and those guys must be some HOT. SHITS. because Octo Sofa here costs over $70,000. That's even more than the Fletcher Capstan expandable table, which at least does hypnotic geometrical tricks to earn its price tag. And even it ranks as way overvalued according to Dude reader Difdi, who is responsible for one of my favorite product comments ever: For $70,000 I'd expect it to transform into Optimus Prime, not just get bigger. Agreed. In the same vein, in exchange for my next 5 years of allowance Aster Papposus better be able to come to life as the Kraken and do my bidding for me. On my command, not just when no one else is looking like Kim Cattrall did for Andrew McCarthy in Mannequin.

Aster Papposus is made of two identical polyurethane and feather-filled pieces fitted together to form the couch before us. The manufacturer states that it is amazingly comfortable, with no rigid frame, and if the third photo above with that lady lying all naked and sprawled across it is any indication, I would say that statement is accurate.

My doomsday prediction for 2023: the Octopus Bananas will come for us! And since we'll all be dead or enslaved, and unable to get merch and gear to remember it by, here's an Octopus Banana Rug you can buy before the Octo-Banana-pocalypse...

I can't tell exactly how giant Alfred the Giant Crochet Octopus is, but if the evidence in the image gallery above is any indication, he appears to be the equivalent of 1 x standard lady who has not yet mastered the art...

We're already working, grocery shopping, and ordering piles of sweatpants and 3-course dinners without leaving home. The Couch Console proposes taking things a step further: do it all without leaving your couch. Containing...

I've slept on my sofa for the past 2-1/2 years. I've even slept in my sleeping bag on my sofa. But until now the two were not a happy combination, as the outsides of sleeping bags are slippery, and the heights of sofas...

Suspend your disbelief! Or let Mark Mitchell suspend it for you with his Suspended Sofa. I don't know how, and I don't know with what, but Mitchell has figured out a way to make a sofa supported by a single side. Presumably...

Can you smell what The Rocktopus is cooking?! Mmmm, pulpo a la plancha...

And you thought you'd never find the perfect gift for Medusa and Voldemort. The Boa Sofa was designed by brothers Fernando and Humberto Campana, and I just wonder what this snaky, sultry joint venture says about their...

The Animal Chair collection constitutes a diverse range of species, from mammals to reptiles, and even insects. Each creation retains the animal's natural vitality whilst being totally biologically accurate in their appearance...