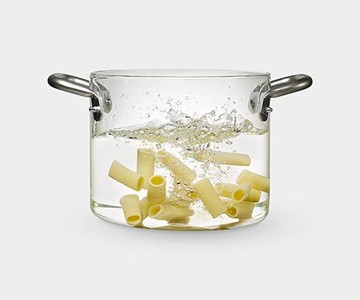 It's no Sears Tower* glass Skydeck hovering 1,353 feet above the streets of Chicago, but at least this transparent stock pot is a lot easier to haul home, and way less likely to make you vomit. Well...unless you're a terrible cook. In which case...it's vomit all around! But you won't know that until you sit down to eat. As the pasta boils or the meat stews, you'll revel, blissfully and nausea-free, in the captivating food science your pot reveals.

The 8-quart borosilicate glass pot from MoMA has been tempered, rendering it flame-proof and able to withstand high temperatures. Is the rice maintaining its simmer? Is the chili burning to the bottom of the pot such that it's going to take 3 days of soaking for you to scrape the congealed layer off? Now you can answer your most pressing culinary questions with a 360-degree view, and without lifting the lid. According to MoMA, boiling water also "brings ingredients to life." Pasta "begins to twirl and dance" and vegetables "bob and brighten" during the cooking process.

The transparent pot's glass is non-porous and will not retain and pass along past meals' flavors to food it cooks in the future. Fingers crossed that MoMa will follow up its foray into transparency with a clear glass toilet.

The transparent stock pot is a top Dude Gift for the Kitchen pick.

*I know this building is now technically called the Willis Tower, but the last time I used that term in discussing the Baby Muzzle a disgruntled reader told me I was not allowed to do it anymore. Specifically, he said: "hey. listen here. It's not the [expletive] WILLIS TOWER. It is the SEARS TOWER. and you will hereafter refer to it as such."

Wheeeen...angel hair bo-ils high / That's when Al Dente cries, "That's Amore!" And when it's tagliatelle you're cooking to the soft bite of perfection, this singing, floating pasta timer will belt out "The Godfather Theme"...

Sometimes I wonder what I'll do if one day I don't want the Kraft Mac & Cheese my mama or Bob Evans serves me. Like, what if I want Kraft mini wieners* & cheese or Kraft Jet-Puffed Jumbo Mallows & cheese? Or, screw all...

Life hacking innovator Unikia adds the Stirio to its online showroom of tools that will expedite and elevate the filling of my belly. We previously saw the Compleat FoodSkin flexible lunchbox, a simple trick for keeping...

Han Solo, poor bastard. First Vader froze him in Carbonite, and now fancy French cookware company Le Creuset has cooked him in cast iron. Coming November 1, 2019, to a very tiny part of a galaxy only as far, far away...

The Scaredy Cat Hot Pot Trivet is arched and ready to pounce! Prepare to have your face clawed off! ... Unless you quick grab that dutch oven full of chili and squash the Scaredy Cat in place...

Kraft Mac & Cheese that's dyed pink and flavored like candy. That's sweetened pink noodles and cheese sauce. So...is this Kraft limited edition supposed to be a Valentine's Day gift for someone you love or so

The first time someone told me about Neti Pots I thought they sounded like some new age hippie yoga naturopath weirdness. And also kind of gross. Seeing a Neti Pot in person only solidified this belief. Then I tried one...

Al Dente is an old Italian fisherman who fears neither noodle nor fishin' hole. Even when the former is 4 times his size, and the latter is filled with water bubbling at 212 degrees F. Nope, Al Dente is ready to sit on...

Smoothslizer wants to know one thing: keto kids, plant-based babies, low carb cuties, how you doin'? Him, he's smoooooth over here, spiralizing your zucchini into zoodles, and spinnin' your butternuts into sheets of grade...

Isn't half the fun of cooking making a ginormous mess? And then spending hours you could be eating your Beef & Fritos Enchiladas cleaning up the kitchen afterward? Hmmm...maybe not so much. One of the top culinary offenses...