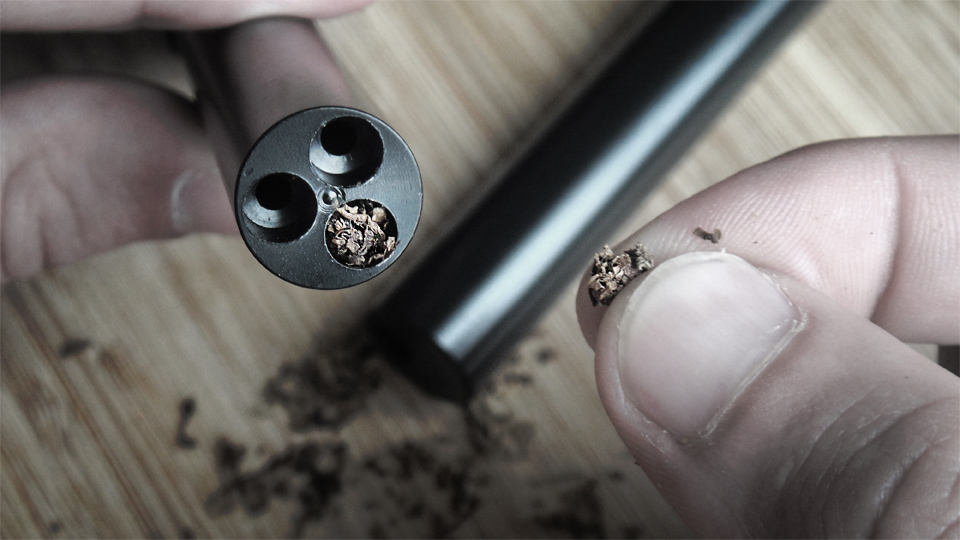 Rolet (roll-ay, like Nube and ole!) is the triple barrel shotgun for pacifists. Really. It loads. It fires. It smokes. And I'd argue that using it will make you feel way better for way longer than shooting something. Though, Compulsory Disclaimer Alert: the rolet pipe was designed and is intended for tobacco use only; its performance cannot be guaranteed when combined with other substances.

Rolet promotes "portability, sharing, and convenience." Three barrels for thrice the fun, or thrice the number of people partaking in the glorious inhalation experience. Hmmm. Multiple people sucking on my pipe? Well, as long as I know them and where they've been, I guess. Like me, Cornelius, and Victor partaking of the same rolet would be OK, but not me and one dude who claims his sneezing is just allergies and another who swears that pulsating red protrusion along his lip line is just an ingrown hair. Because I cannot have direct exposure to the germs of strangers. Unless I am very broke and notice someone who looks clean and decent take only two sips of their full pint of beer before peacing out of the bar.

The rolet triple barrel pipe takes smokers from load to sit-back-and-unload in 3 steps: 1) Add loose-leaf to its chambers; 2) Slide the sleeve over the main device to a secure fit; and 3) Light the exposed chamber and inhale. Or don't. I'm not here to dictate how you run your life. Just to try and facilitate your enjoyment of it.

Pledge for your rolet on Indiegogo through October 4, 2013.

August 2014 Update: rolet funding was unsuccessful, and at present it does not appear that its creators have proceeded with producing it for the public.

To their designer smoking line Session Goods has added designer...storage, if you will. The new Stash Jar and Ashtray have the same handsome, minimalist design as the company's bong, pipe, and <a href="https://www.dudeiwantthat.com/sponso

They call the Screwpop Hit Kit a "personal herb tool," which sounds like a major clash of the dialects to me. Urban Dictionary meets...corporate PR lingo that won't offend my Aunt Jan. Or how 'bout this SAT-ready analogy:...

My favorite part of 7pipe's Twisty Glass Blunt video is the shot of a lady taking a hit off one and then blowing out birthday candles. Good stuff in, bad stuff out, and now we eat cake!...

420 Science breaks it out only once a year, so if a 14" long, 8-bowled glass Grav Labs Menorah bong is what you've been foregoing 20 sacks and Gordita Supremes to save up for since May, here's your chance to turn your...

Now, Mama, before you start worrying, nagging, or otherwise getting your panties in a bunch, rest assured, Mom Grass Hemp CBG Joints are 100% legal. They're made not of the evil wakki tabakki like those marijuana cigarettes...

I don't like the Icky Stick just because I get a kick out of its branding schtick. I mean, that's the biggest reason, but so too am I interested in this hand pipe's claim that it has been "specially designed to provide...

Sorry, hippies and artistic stoners. Now that marijuana is this close to mainstream acceptance, and not that much farther away from legalization, it's time for the techies and trendsters to move in and take over the conception...

Norman Osborn and Beaker from The Muppets are going to have a conniption when they get a load of this Frankencreation of welded steel and glass. The Menagerie of Mechanized Happiness Machine--ahhh, its name alone evokes...

I like how the entirety of the promo video for Blazy Susan Spinning Rolling Trays is just a tray stocked with smoking gear spinning 'round and 'round...and 'round to some chill electronic background music. Like the Blazy...