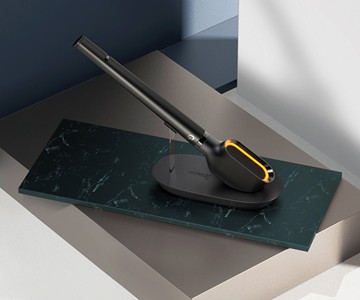 You may consider the Holmes Pipe, a vaporizer twist on Detective Sherlock Holmes' iconic tobacco pipe, a sacrilege. A perversion of purity akin to turning the Houston football stadium into a Death Star for Super Bowl LI, with opposing teams dressed up as the Light Side and the Dark Side, and quarterbacked by Skywalker and Vader. Wait...that would be awesome. Let me start again.

If you scorn vaping as a practice, or consider it an obnoxious mark of Hipsterdom, you're probably not going to like the idea of a vaporizer infiltrating a revered classic, and trademark of Sherlock Holmes. But relax. The Holmes Pipe is just a concept (at least for now). Steve Bae designed it for Peterson of Dublin, an Irish cigar pipe company with a Sherlock Holmes line of products, that recently celebrated its 150th anniversary.

Bae considers his Holmes Pipe vaporizer a "next generation" smoking accessory reflective of the techno-informational world we live in today. He pays tribute to the Holmes character in his design by modeling his vape's profile after the lines of Sherlock's deerstalker hunting cap, a smooth dip from top to brim. The lines continue to form the edging of the cigar bowl, with the rest of the Holmes Pipe following a minimalist layout to further accentuate them.

The Holmes Pipe bowl has an LED indicator that makes a swirl of light instead of smoke during inhalations. A set of + / - controls trigger vaporizer voltage and depth of flavor.

Ha! More proof that if pens wish to avoid extinction they better start bringing more to the table than a barrel full of ink! In fact, Grasshopper makes the biggest leap of all--the one I've been waiting for: it eliminates...

Mike Bites. Now this is the kind of earful I'd take gladly. No real human body parts or nagging from my mama required with Mike Tyson's cannabis gummy ears, just a chill night and better sleep. And a bit of glee sinking...

I know these Mash'Ems Care Bears are for kids, but I can't look away from them. Every one of the six squishy surprise characters contained within the Mash'Ems Super Sphere just keeps...staring at me...

We all need a little balance in our lives. Some of us find that balance in the contents of a pipe. And for those dudes and ladies, what better pipe to represent that which you seek but the Balance Pipe from Tetra?...

The idea of monthly subscription boxes for guys used to sound kind of girly, but now, dude. Mail-order man memberships are everywhere. And include clubs for pretty much anything you can think of. Socks, razors, and beer...

Vessel's Helix one-hitter has some serious drip. And since I'm pretty sure no one in the generation that made up the slang term "drip" will be reading this, but probably some Gen Z parents will, that means the dry herb...