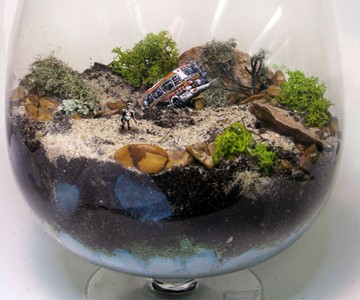 Way to go, Walter White and meth heads, Breaking Bad has reached terrarium levels of popularity. Terrarium. I find that word difficult both to spell and to say aloud. Try it. Rough on the tongue, 'ey? Not very pleasant on the ears either when I really think about it, which I am because I have nothing better to do. Aquarium. Now that's a generally congenial word. But clutter it up with a couple more Rs and it becomes a guttural disaster. Would you like to know what I think about some other words? As in, the best and worst words in the English language? Sure you would.

BEST WORDS IN THE ENGLISH LANGUAGE

WORST WORDS IN THE ENGLISH LANGUAGE

Breaking Bad flora fabricator extraordinaire Rachel, also responsible for this piece of Beetlejuice amazement, uses real moss and lichen in her terrariums--in this case varietals that, much like Heisenberg's haircut, require little water and care. The plants also sit in succulent and cactus-friendly soil for people who want to add some vegetation to the wreckage. The open globe is 11" tall and includes a hand-sculpted and painted miniature re-enactment of the series' famed first season opening sequence. Walter stands 1/4" tall and his RV 1/2" long. A shout out to Breaking Bad's breakout star, meth, comes in the form of blue sea glass lining the bottom of the terrarium.

Worn, signed, and sweated upon by Bryan Cranston himself. Also mingled in: the DNA of Jimmy Fallon and Common, whom the Breaking Bad star let take a turn in this Landon Meier Hyperflesh Walter White mask at Comic-Con...

Terrarium, aquarium, or herb garden. Grow flowers in the winter, or make a rainforest for your frogs. Read no complex manuals and acquire 0 new skills to learn how to do it. The Biopod is smart enough for the both of...

Ahhh, the Moss Carpet reminds me of waking at dawn in a cloud forest, creeping across the rich and vibrant green vegetation of its cushioned floor, the beating heart of nature tickling my feet. Yeah. Either that, or being...

Would LEGO ever produce and release a Breaking Bad Meth Lab? Probably not even if its CEO and Board of Directors were all required to inadvertently step on an errant brick once an hour, every hour of the day, every day...

Do you have a (glow-in-the-dark, searing lime) green thumb? Do you want one? We can't promise this bioluminescent mushroom habitat kit comes with brownie recipes and resultant rainbow vision, but even without the magical...

Small Business Shoutout: BloomingTables Living Furniture. Based out of San Diego, BloomingTables designs coffee, console, and side tables, plus desks eager to "bring the beauty of the outdoors - indoors." Their simple...

VHS tapes live! Or at least, you can give them new life - actual, thriving life - with one of these recycled VHS tape planters from Nifty Recyclables...

Make a houseplant the light of your life with a Mygdal Plantlight. Contained in a hermetically sealed terrarium-style dome, the Mygdal Plantlight is an entirely self-supporting ecosystem that brings joy to the home via...

Here's a tiny Marimo Aquarium for all of you insane adventurous people out there moving into tiny houses. Think of it as a housewarming gift. Except, uh, you'll need to buy it yourself. Even at the tiny prices Etsy shop...