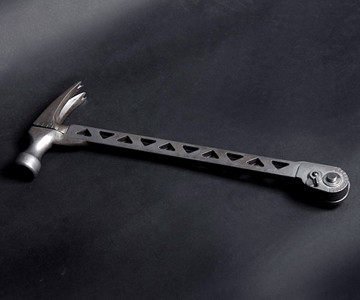 Although I enjoy calling people tools, I don't really understand how the term came to be an insult. Aren't tools generally helpful and beneficial to the cause of man, as opposed to the burdens of dead-weight idiocy implied by the word's application within the vernacular of our contemporary youth? Furthermore, when a tool looks as slick and functions as versatilely as the Cole-Bar, wouldn't you sort of be honored if someone drew a comparison between it and yourself. I would. I...what, Mom? No, that doesn't mean you have to sew new name tags into all my T-shirts and underwear. No, I don't want you to start calling me Tool, I just...I was just using hyperbolic logic to make a point!

The Indianapolis-based Hyde family created their 7-in-1 Cole-Bar to provide the services of a hammer, crow bar, demolition tool, angle measurement tool, ruler, socket wrench, and nail pliers. Its default setting is "hammer", but by way of two conjoined pieces of carbon steel. The halves can swivel apart and lock to become a crow bar, as well as call upon their patented gear/ratchet system to hold position at any 15-degree increment from 0 to 180. The segments also separate completely via a button release to effect the implement's demo tool transformation, and since Cole-Bars use a standard 1/2" drive to connect their head and claw shafts, the drive doubles as a socket wrench.

Cole-Bar prototypes measure 14-1/2" long and weigh 43 ounces. So more than a typical hammer, but that's OK because Cole-Bars are not intended for use by the weak, the fragile, or the tools of the world. They seek Kickstarter funding through June 24, 2013.

December 2013 Update: The Cole-Bar Hammer exceeded its crowdfunding goal and is now available for direct purchase through the company's website--follow the link below.

Honestly, the Vipukirves Leveraxe initially intrigued me because the guy holding it in one of the above photos is wearing black-and-white gloves that sort of make him look like he has a hook hand, and I thought perhaps...

Leave your enemies be, and hack up the ones you love with this Viking Pizza Cutting Axe. And by the ones you love, of course I mean the Sausage Supremes, the Margheritas, the Veggie Lovers, and the Pepperonis...

If I could have only one fireside friend, would it be Estwing's Special Edition Fireside Friend Axe, or my friend Cornelius? Hmmm, I can't decide. Let's go over the merits of both...

Since The Walking Dead started again, I've been thinking I need a new zombie-decimating weapon for use in my daydreams about stuffing them with bullets and hacking off their heads. Melee Mods' Tact-Axe and Gatchet should...

Though he'll probably stick with Mjolnir for wailing on Loki, if Thor were a construction worker I bet he would use one of Wilton's BASH Unbreakable Sledge Hammers. Touted the toughest sledge ever built, BASHes with heads...

Uh, I know it's called an Omniblade, but I still wonder if it's wise to hold this apocalypse-ready machete multi-tool from omni ends. For example, it seems like the Omniblade grip the dude in the photo has chosen is just...

ACLIM8's COMBAR FoldaXe Pro is a Red Dot Award-winning adventurer's multi-tool that integrates the company's FoldaXe base with the knife and saw from their Pro Kit. Beautiful and compact, this new COMBAR is built to help...

Ready for some adventure, mate? The AM-V2 from Adventure Mate is a 5-in-1 multi-tool ready to help you chop up, shovel up, hook up, hammer down, and saw through the outdoors. But, like, in a nice way...

Utilitarian cosplay. How many occasions do you have to use those two words together in a sentence? (And can you say them 5 times fast?) Ever since I got the ix-nay on wearing my "formal and "functional" Mongol armor suit...

Blacksmith Stephen Heeney designed and welded this chain link axe himself. He does not recommend using it to chop wood. He recommends using it to hack the ever loving viral entrails and decaying brain matter out of zombies...