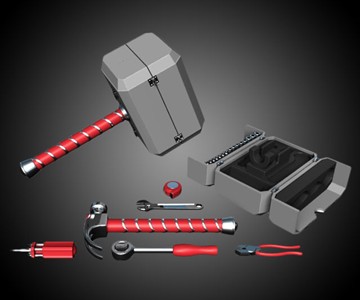 Utilitarian cosplay. How many occasions do you have to use those two words together in a sentence? (And can you say them 5 times fast?) Ever since I got the ix-nay on wearing my "formal and "functional" Mongol armor suit to work when we host important business meetings for potential investors from Asia, I hav none. But Dave Delisle of Dave's Geeky Ideas has created at least one cosplayer's dream with a very utilitarian side to it: the THOR Hammer Tool Kit.

Before you start sending me emails about how you hope I get hit by a semi, let me state the disclaimer: Dave's Geeky Ideas are called "Geeky Ideas" because they're just that. Ideas. Concepts for brilliance that he's developed mock-ups for, but has not actually made, and cannot sell to you. Maybe some day he'll change his mind, but in the mean time, we'll have to try to just enjoy the idea for its intangible beauty.

The THOR Hammer Tool Kit starts with Mjolnir as a clever hinged tool box, and then opens up to reveal a full set of handyman implements. Check out the GIF here. Including an exterior carrying handle that doubles as that for the set's actual, modern-day hammer. (It secures into a removable tray for stable storage and transport.)

iFu calls the design of their Mini Electric Screwdriver "exquisite," and while I think that word should be reserved for old wines and revenge tactics, I will concede the aluminum alloy metal shell, one-piece molding...

The screwy thing about this ring is...literal. And only literal, because the Screwdriver Ring isn't weird or messed up at all. It's awesome!...

I know. There are only so many multi-tools one can own. But only one multi-tool one can own also impersonates the precious, innocuous fish who died on you (possibly repeatedly) during childhood. What up, Guppie Multi-Tool?...

I never thought "short" and "stubby," especially used side-by-side, could be such a compliment. But the Short Stubby Screwdriver from Gato Tools is a double-ended, rotund-centered beauty I'd screw with in a second. And...

I'd screw that. I mean, with that, I'd screw with that. The Fanttik Mini Electric Screwdriver Set is a rechargeable pen-sized screwdriver that can screw electrically with a high and low torque of 0.2/0.05N.m, or screw...

BullseyeBore or not, as someone who often has trouble even walking straight, there's close to a 0% chance I'm ever going to be able to cut, saw, or drill straight. But for the rest of you, the handy ones who only catch...

Yep, it is indeed a Tool Belt. Good language manipulation, 686. This 100% full-grain and waterproof leather securer of pants incorporates a few of your trusty everyday carry tools into its everyday weary style. (Yes...

The Yankee Push Drill does not plug into the wall, which means its successful use is dependent entirely upon the well-oiled machine that is its handler's body. I bet my right arm and shoulder would be sore for 3 days...