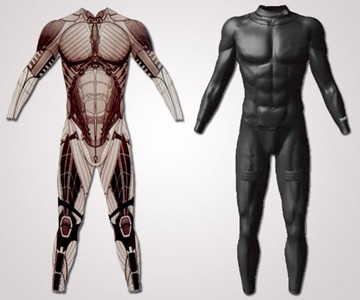 The fit is hitting the shan. The adrenaline dam has busted, and your fight-or-flight response is sprinting at a world-record-setting pace. What does it look like? Are you stepping up? Freezing up? Freaking out? Peacing out? At this moment, you have the power to lift a walrus, wrangle a gator, upper cut a kangaroo, run faster than a 3-legged mountain lion, and feel impervious to the pain their tusks, teeth, fists, or claws might inflict throughout the process. But your heart is also probably clocking in at 220. Blood vessels are constricted, and blood pressure is unnaturally high. The superhero effects, if sustained, could prove debilitating at best, fatal at worst. Unless you're wearing an AdrenaSuit.

Though still in research and testing phases, the AdrenaSuit is one of the latest in low-profile offensive/defensive body armor designs for military, law enforcement, and (fingerscrossedsomedaymaybe) private use. It is a full-length, bulletproof (and knife-proof) bodysuit with an internal system of "veins" housing a magic potion of hormones and neurotransmitters that (supposedly) safely stimulate and maintain the wearer's fight-or-flight response for up to 30 minutes at a time. When activated--via one of three release buttons at the neckline, waistline, or left ankle--the veins release the chemical cocktail onto the skin, it penetrates the pores, and, within 20 seconds, the body is primed for peak strength, speed, and power. The effect presents itself as perhaps a less hyperbolic version of Bill Harkin's superpower on the SyFy series Alphas.

The combined effect of a bulletproof suit and enhanced physical capabilities could prove invaluable to hand-to-hand combat scenarios both in military conflicts, and during law enforcement activities. The hope is that it will cut down on the number of injuries both sustained and inflicted by those wearing AdrenaSuits, as the obvious physical advantage should make wearers feel more in control of their actions, and preclude irrational decisions.

OK, so how does it work? (Disclaimer: We basically have a kindergarten-level understanding of science and the universe, so for the full, biologically- and ballistically-astute breakdown, check out the article on Next Big Future.) Similar to the Bulletproof Polo shirt, the AdrenaSuit itself is forged from an anti-ballistic Kevlar-based material, with microfiber casing on the inside and outside to regulate body temperature. The computerized mockup photograph also shows a plastic composite coating, probably just to make the suit look more badass than it did to begin with. Between the Kevlar and inner layer of microfiber is the elaborate, pressurized circulatory system, which pops like a can of Pillsbury biscuits when someone detonates one of the suit's releases. And, yes, releases can be inadvertently detonated under significant impact, but if the wearer experiences a blow heavy enough to unleash the hounds, the hounds are probably needed.

The AdrenaSuit's veins are filled with a proprietary synthetic blend of epinephrine (adrenaline), endorphins, and other Y3K mad scientist juices the makers want to keep all KFC-chicken-recipe secret. They call it AdrenaBoost. And claim the beauty of AdrenaBoost is that while it amps up the sympathetic nervous system in terms of adrenaline distribution, it also puts the kibosh on some of the unsavory chemicals and enzymes, such as cortisol, released during natural fight-or-flight responses. You know, the ones that cause some people to go motionless, move in slow motion, or flail erratically. AdrenaBoost allows humans to achieve the pinnacle of their physical powers, while remaining calm and purposeful during the rush (read: no one shits their pants).

Hulked-out performance and muscular output are obviously proportionate to the individual's natural, Bruce Banner capabilities. That is, the AdrenaSuit donner who is jacked and cardiovascularly conditioned is going to fare better than the sedentary Dunkin' Donuts enthusiast.

100 hours to build this beast. Totally worth it. Their words, not mine. Not that I'm calling BS or anything. It's just that I'll never know if Starwood Motors' Full Metal Jacket Jeep is totally worth it or not because...

I sure hope I never need to use a ShelterCube Extreme, but after what I "anonymously" mailed my tight-ass boss, I feel like maybe a storm's a-comin'...

JP Rishea of Bionic Concepts has created a bit of a name for himself in the cyber/steampunk gadgetry world. From his exo-gauntlet to his gas-powered LED wings, Rishea's designs always emerge as strangely tas

Buckle up, boys, it's October 1. The onslaught of sexy Halloween costumes is revving its 400-asspower engine. Segue into the spectacle with a looksee at Spanish designer Boyd Baten's cyber armor. No, wait, I mean Boyd...