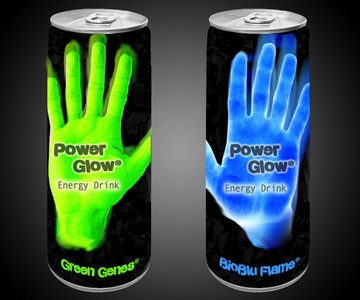 Throw away the EL wire and chemical-laced makeup. If you want to look like a club kid, Doctor Manhattan, or a walking biohazard, come the end of 2015 all you'll have to do is gulp & glow. On top of injecting your blood stream with the inordinate quantities of caffeine and B vitamins we've come to expect from energy drinks, Power Glow says it will also make those who drink it shine. Literally.

Down a 12-ounce can of the witch's brew and 10 to 15 minutes later you'll be Captain Bioluminescent, emitting an outer glow in a radioactive green or lightning blue hue for the next hour or so. Move over, Red Bull. Rock Star. Monster. It's 2015 and we pushers of the technological envelope, we attendees of the raves, we partakers in the hallucinogenic drugs demand more. We don't want no stinkin' Coca-Cola. We want Glow-Ca-Cola!

And why shouldn't we have it? If we can shit gold, we should be able to beam green, right?

Power Glow, to be available in colors Green Genes and BioBlu Flame, pairs luminescent pigments with reactive proteins and enzymes that alight in response to human metabolic activity, plus the energy drink's calcium content. Found in some jellyfish and squid, the anglerfish, and many types of dinoflagellates (marine plankton, as seen in the Dino Pet) active photoproteins, such as luciferase and the crystal jelly's highly studied green fluorescent protein, interact with free radicals produced during human cells' respiration process to generate oxyluciferin, or bioluminescent light.

Power Glow's glow presents itself in humans almost exactly as it does in the animals from which its ingredients were extracted. However, since humans are obviously much larger than existing bioluminescent creatures, the glow does tend to emit most prominently around the digestive area--belly and back primarily, with the effect apparent but waning north and south from there.

While Power Glow is still jumping through the hoops of FDA approval, the company points out that scientists have been injecting rat, pig, monkey, and rabbit embryos with jellyfish DNA for years now, with the resultant offspring adopting the invertebrate's genetic trait and glowing bright green with no ill side effects. Some may also remember a recent story about Lick Me I'm Delicious. That company incorporated the same synthesized proteins from jellyfish into their ice cream, producing a glow-in-the-dark rival to Ben & Jerry's deemed safe for human consumption. Power Glow simply takes the edible light idea a step further by crafting the chemical reaction to occur inside rather than outside the human body.

In addition to making you all lit up like a Christmas tree for Halloween, zombie cosplay, and your next date with She-Ra: Princess of Power, Green Genes and BioBlu Flame Power Glow will also inject you with the standard energy drink players: 85mg of caffeine (slightly more than Red Bull); vitamin B6; folic acid; vitamin B12; and a handful of amino acids that sound fancy because no one can pronounce them.

Daiwa says their Vitality Swing, a chi swing machine, provides "passive exercise," and I don't know if that's true or possible, but I sure do like the sound of it. When in use, the machine sways back and forth, creating...

I'd like to say LAVO deserves a resounding "Bravo!" - or at least a fist bump - for becoming what its Australian creators call "The world's first integrated hybrid hydrogen battery that combines with rooftop solar to...

Red Bull creator Chaleo Yoovidhya died in March 2012, leaving behind an unparalleled energy drink phenomenon and industry. Not since Coca-Cola and YouTube spectacles involving numerous tabs of Alka Seltzer has a carbonated...

So many ways to interpret the Pussy energy drink. Does it give men in need the bravado to get some? Reinvigorate the nether regions of women who aren't in the mood? Inject some downtown youthfulness into cougars on the...

Blinded by the light / Sucked it up like some juice / Powered my tech all through the night. SolarGaps window blinds aren't your average smart home addition. They don't just auto-open, close, and adjust based on environmental...

Pocket Latte - Coffee in a Bar

Have you bitten off a latte? More than you can chew? Hang in there, keep working on it - once you get that big bite of Pocket Latte down, this coffee in a bar will give you a near-instant pick-me-up. A whole cup of coffee's...

In a way, we all produce HomeBiogas right inside our amazing bodies. And I don't mean that just as a Beavis & Butthead joke (though, check out the biogas I'm making from these chili cheese jalapeno nachos, Beavis. Hehheh...

While designer Lei Yang's Energy Tape, a roll of sticky solar panels, is still just a concept, the idea is based on technology that is currently available. infinityPV makes Solar Tape, flexible, printed organic solar...

Having a death wish can score you $5 million. At least in free Super Bowl 50 advertising, and at least if you're Death Wish Coffee Co. In addition to the hyper buzz they get from downing cups of their ultra-caffeinated...

The last day of summer is a sad day for everyone, but for some, that transition into fall, and then the gloom of winter, is even sadder. SAD sadder. PEGASI's second edition Smart Light Therapy Glasses endeavor to help...