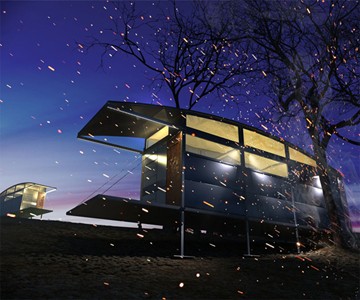 I'm nearly sold on AbleNook, a collapsible housing unit that requires neither appreciable time nor skill to assemble, based on its Kickstarter project's opening quote alone. From Albert Einstein: "We can't solve problems by using the same kind of thinking we used to create them." With disaster relief efforts, school and civic portables, and flex office space in mind, AbleNook masterminds Sean Verdecia and Jason Ross created a totable dwelling that is both easily deployed and easily set up and broken down--no tools or construction knowledge necessary. Housing that comes to and goes with you. The AbleNook is like a more efficient and practical version of a trailer, and an exponentially slicker, classier version of a dirt-colored, windowless concave shell. (Haha, suck it, turtles! Humans win again!)

In addition to transforming from flat to livable in a matter of hours, AbleNook advantages include:

Best of all, as alluded to above, AbleNooks are not ugly. Designed by an architect with as much taste as knowledge of building technology, I would rank their physical appeal right up there with, say, an Emma Stone or Emma Watson. Yeah, definitely a solid Emma in the looks department. Single module prototype AbleNooks measure 20' long x 13' high. Interior ceiling height is 10'.

While Kickstarter pledges in support of the rapidly deployable modular dwelling do not return cubes housing AbleNooks themselves, backers can show in dollars their support of the creation of AbleNook Prototype 002 which, according to Verdecia, aims to be "an even lighter, stronger, more affordable, quicker to assemble, and straight-up more beautiful version of [the current] AbleNook 001." If the $60,000 funding goal is reached, it will help the team with, for example, efforts to create a new proprietary custom die-mold for use in building lighter, stronger universal structure members, as well as lighter composite paneling for the AbleNook's slide-in wall panels.

At the $25 pledge level, backers receive an AbleNook T-shirt. For $75, an autographed AbleNook design book is added. $250 returns an AbleNook puzzle demonstrating the dwelling's assembly along with the T-shirt, and $1,000 and $2,000 levels come with either a 4' or 5' AbleNook LED hanging light made from the project's first-run parts. The pledge window is open through February 4, 2013.

Oooh, the Star Lounger looks like something straight out of the mind of Tim Burton and the Deetz house in Beetlejuice. It doesn't have any mechanical components, though, so the star's arms won't fold in for a hug / restraint...

Sound the smells! The BYOJ-001 reappropriates a bullhorn-lookin' speaker into a fragrance diffuser that blows scents rather than tunes around your home. A collaboration between OJAS speaker brand founder, Devon Turnbull...

I'm dude enough to confess that I just panic bought two First Minute Vest wearable survival kits after reading an article my mama emailed me from Wired entitled How to Prepare for Climate Change's Most Immediate Impacts...

If the UK's Spitbank Fort didn't look and sound like post-apocalyptic luxury at its finest to begin with, its location in The Solent, a major shipping route along the Isle of Wight, should cement the status. The Solent?...