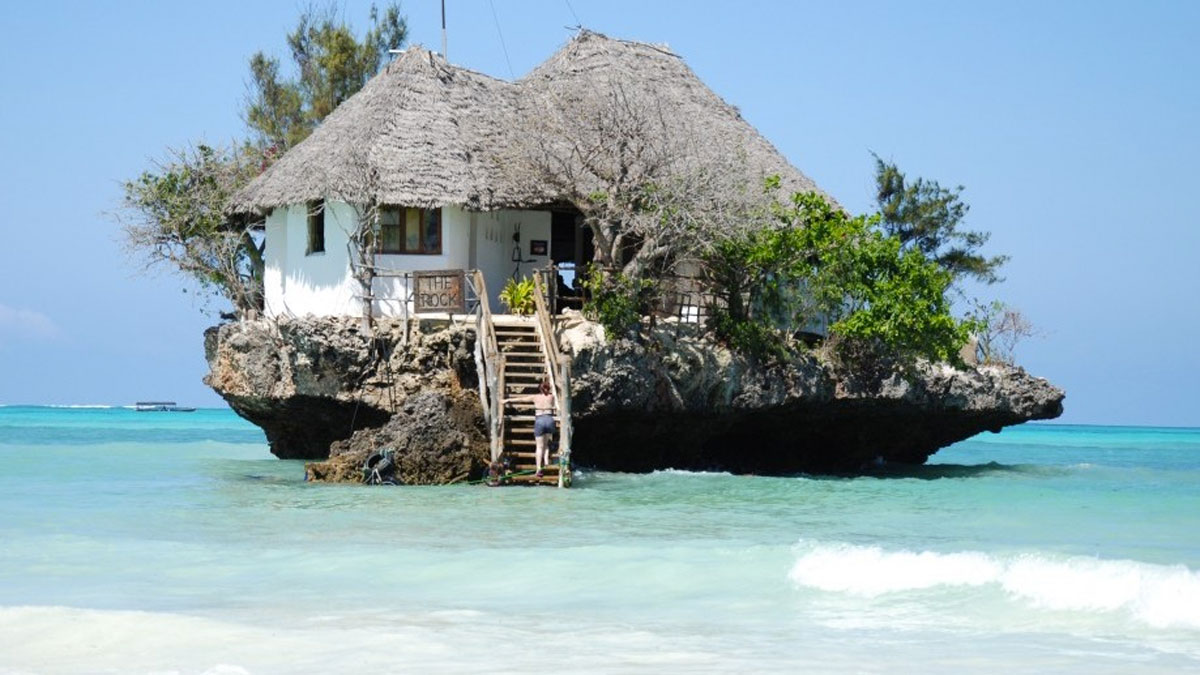 Well, The Rock restaurant proves Zanzibar has at least one thing going for it besides its say-a-licious name. Zanzibar, Zanzibar. Have a Zanzibari dinner in Zanzibar. I think I'll rename my girlfriend's cat Zanzibar. It's not like he responds to Shadow, or anything else I say, anyway. To recap: The Rock is a dining establishment built on a rock. It sits in the middle of the Indian Ocean, just off Michanwi Pingwe beach, on the Tanzanian archipelago of Zaaaanzibarrrr!

The Rock used to be a fisherman's post, but a group of restauranteurs converted it to one of the coolest places to grub ever in July 2010. During low tide, you can walk along the beach and ascend the staircase to the restaurant's stunning outdoor lounge with a panoramic ocean view, and simple, 12-table interior dining area. At high tide, they'll tool you out by boat.

Not surprisingly, seafood dominates The Rock's menu, but you'll also find some local Swahili dishes and influences on the list.

If you thought nothing could beat off-roading on the weekends, imagine this: off-roading on-road during your weekly commutes and leisurely drives around the 'burbs. Jeep Germany's new Adventure Tires, on sale starting...

I don't know if falling onto Duffy London's forthcoming oceanic cross-section coffee table will send you into The Abyss, but I can almost guarantee running into it will stub all of your toes and bloody your entire leg...

A tasting menu for the ages, or for the eyerolls? The Kentucky Fried Chicken Degustation, an 11-course dinner featuring KFC's most iconic menu items, is taking reservations for a run in...Sydney, Australia? Not Louisville...

I'd never seen yooperlite before today, but after just a few seconds of gazing at the UV-fluorescent stones, and the designs Palcamsol Distributing has turned them into, has me going all Fred Flintstone and saying, "Yooper...

I would like it very much if CGear's Sand-Free Multimat stayed sand-free by emitting an invisible dome barrier that repelled...no, forcefully rejected all granular compounds...and children...that got within a foot of...

Give your cuticles, dry skin, scabs, and nose holes a break. Pick 'N Peel Stones will provide the same type of release for your anxiety and antsiness without making you bleed or leaving a scar. Some of you pickers may...