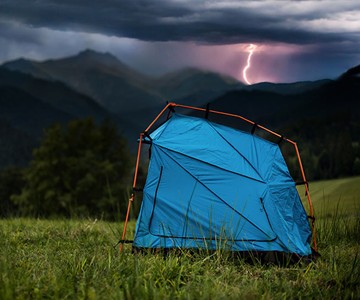 Before I continue, and before the angry emails start rolling in, let me be clear: the BOLT shelter is still in R&D stages. Product / industrial design student Kama Jania developed it for an academic project, and while she has built and tested at least one prototype, the tents aren't yet available for consumer purchase. I don't see why they won't be in the future, given their resilience to discharges from both high-voltage and current generators, but who knows? Some of the best ideas never leave their inventors' garages, while the rest of use deal with a market brimming with Fundies and Vibrating Ab Belts.

Jania developed BOLT tents to combat lightning strikes. Statistics show that a few thousand people a year get struck by storms' whips, and 96% of those are people stuck out in the open, particularly hikers and campers. BOLT HALF, BOLT ONE, and BOLT AIR are a family of shelters with aluminum mainframes extending through the middle of the tents, plus aluminum connectors and poles. Generator test results showed that when currents comparable to lightning (30 to 40 kA) struck the top of the pole frames, electrodes imitating a tent occupant's head absorbed between 400 kV and 1MV--still enough to produce a shock, but a vast (90+%) decrease from the full blow of the incoming current, and most likely not strong enough to cause injury. During current generator tests, a series of electrical discharges with different peak current values were directed at the top of the frame of the tent poles to test BOLT durability. They caused some scorching at the pole joints due to high temperatures, but the tents endured.

All 3 tents in the BOLT series are lightweight and collapsible. BOLT HALF is intended for day-long trips that might bring a sudden change in weather. It can be set up in tight locations, such as a ledge or ridge, and provides full lightning protection (from both direct and ground / step voltage strikes, the latter being the most common way people are struck). BOLT ONE is a 1-person tent for longer trips, which also provides full protection. BOLT AIR is an even lighter version of the shelter, a pneumatic tent with a groundsheet for step voltage protection.

CARSULE - Pop-Up Cabin for Your Car

Camping. Picnicking. Romancing. Or just chilling. The CARSULE is a pop-up cabin for your car whose possibilities are limited only by...well, what you can do in a 6.5' cubic space extending from your SUV, minivan, or hatchback...

What makes Ultimate Toys' Ultimate Camper so...ultimate? Well, the teardrop trailer comes with a shower-equipped bathroom, a convertible queen-sized bed, not one, but two kitchens, and, of course, the Ultimate branding...

Created in Colorado by a group of raft guides, LavaBox is a portable, forest fire safe(r) propane campfire housed inside a military ammo can. It produces no smoke, embers, or ashes, and the amount of firewood and charcoal...

I've said it before, and I'll say it again: no one ever suspects the Monarch winged sleeping bag*. Not even Mother Nature. Whether she's looking to freeze you to the bone, or douse you in her summer sweats, ust's Monarch...

Here's a tip about stingrays: if you fear getting slapped or impaled by one while walking across the ocean floor, shuffle along the sand instead of taking normal steps. Rays like to lay low, and your disturbance of the...