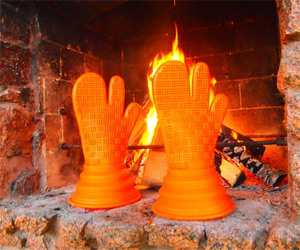 Magic Gloves for grilling, manipulating victuals in and out of the oven, and dinking around amidst the flaming wood and hot coals of a fire are made of a single, solid piece of silicone rated to withstand constant temperatures of up to 460 degrees F. As the King of Inability when it comes to handling food with tongs--I don't think it's possible for another human being to drop hamburgers between grill grates or into open flames as often as I have--the thought of being able to get hands-on with my meat, which I'm pretty much the King of Awesome at, might solidify 2012 as the best year of my of life.

In addition to their high-heat rating and just-grab-it capabilities that allow all to be masters of their BBQ domains, Magic Gloves come equipped with a built-in grease and flyaway embers shield. The conical extension at the gloves' forearm blocks potential sprays of fat and sparks that stir when placing or flipping items on the grill, as well as protects arms from hot sloshing liquids or hunks of baked beans that escape when removing heavy dishes from the oven.

Magic Gloves look cumbersome and space-consuming, but in reality can fold up tidily into a drawer or preciously bowed box for gift-giving endeavors. They are also easily cleaned, safe for the dishwasher, and promise not to lose their shape over time. My girlfriend promised that last bit once too. Let's just say I'll believe it about the grill gloves when I see it and leave it at that.

I think these gloves will come in especially handy when I'm flipping kebabs and the multitudinous things I wrap in bacon. Holy crap, I can also use them to flip bacon in the skillet! Oh man do I wish I had these silicone gifts from the Baby Jesus two months ago. I might have avoided that grease scar shaped like Cuba on my right cheek and still have vision in both eyes!

Creator Simple Ideas Studio is running the Magic Gloves as a Kickstarter project through January 11, 2013. A mere $20 pledge returns one pair of the potentially eye-saving beauties in the backer's choice of 8 colors. For $40, opt for the special edition America, F Yeah gloves in stars and stripes. Willing to spend $60? Then your fluorescent pair of gloves will also glow in the dark. And, finally, $80 pledges produce a truly magical pair of heat-shunners in gold or chrome. Anticipated glove ship date is February 2013.

November 2013 Update: While Magic gloves achieved their Kickstarter funding goal, it appears they have yet to be produced or distributed even to backers whose money has gone (and is gone) to support them. You can check out more details on the project's Comments page.

How do you think Miller Lite came up with Beercoal? That's right, after enough clumsy or drunken beer spills into the Weber produced the tastiest burgers and brats ever, a beer-infused charcoal became the natural next...

Feast your eyes on Blenheim Forge's Limited Edition BBQ Set, and then if you're lucky, feast your belly on the fruits meats of its labor...

Welcome to BBQ Planet. Brought to you by Bricknic, and in a very literal...no, that's the wrong word...a very tangible sense. Bricknic debuted last year with a line of very cool modular campfire and BBQ cooking bricks...

What is Binchotan charcoal? With a name and packaging as sick as "Jealous Devil Onyx Binchotan Charcoal," clearly it's something that's going to turn me into a grilling ninja. A kebab samurai. A BBQ shogun. A hibachi...O

Thoughtfully says their Smokehouse Ultimate Grilling Spice Set is "inspired by profound flavors from around the world." And while I'll admit that is certainly a statement that seems to have been written...thoughtfully...I...

Gozzz-ney-gee, that Dome is a fine-lookin' professional grade outdoor oven! Even finer when I hear Gozney designed their new Dome for both the beginner and the "Yes, Chef!" to do wood-fired roasts, smokes, steams, or...

Open wide, and get ready for a big bite of...cast iron. Or maybe it's aluminum on the menu for you tonight, pizza pan and skillet gripper. Made by Chef Pomodoro, the Pizza Pan Gripper is a wrench-style tool made to help...