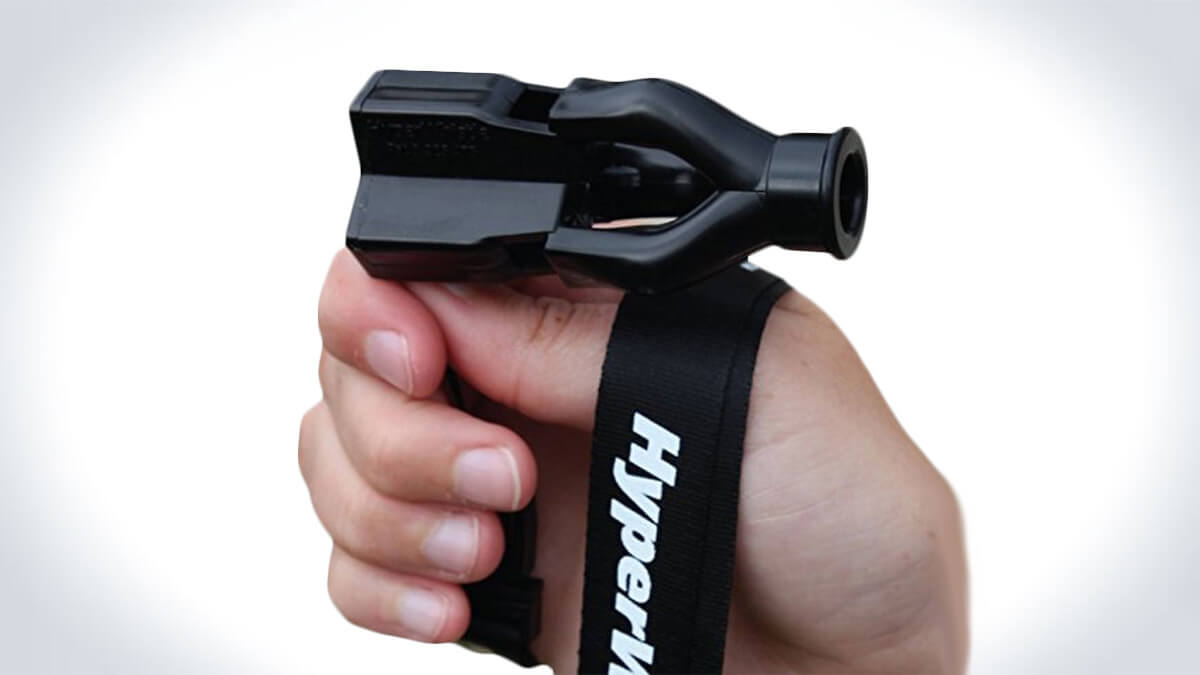 The HyperWhistle takes its World's Loudest Whistle title not from Guinness, but from a mustachioed dude with a sound meter doing a review on YouTube. In the video, he hits a "personal best" 143 decibels with the HyperWhistle, and while I don't know if there are louder lung-powered noisemakers out there, I do know that 143 decibels is louder than a police siren, a jet engine, and fireworks.

But not quite as loud as Italian conversation, the Civilization V opening theme, and a shampoo bottle falling off the ledge in the shower, according to the world of memes.

In addition to its peak output, the HyperWhistle says it has an audible range of over 2 miles. That's great news for people lost in the woods or broken down on a boat, but terrible news for those within a 2 mile radius of an 8-year-old kid whose uncle gave him a HyperWhistle for his birthday.

The ultraloud signaler blows in all environments, including underwater, making it an ideal companion for lifeguards, surfers, and boaters, as well as hikers, campers, and referees. HyperWhistles come with hearing protectors.

How have I never heard of a Screaming Aztec Death Whistle? In all my efforts to exact revenge on my ex-girlfriend, Karen, in all my attempts to prank my friend Cornelius, in all my ploys to convince my mother-in-law our...

These tiny 3-inch air horns put big sound in the palm of your hand. And also the breath of your lungs. Operating off of human rather than compressed air, the 3-inch barrels require you to channel your inner boogie-woogie...

Never one to pass up the opportunity to protect myself or promote hearing loss, I think I'll take a Cybernetic Research Labs Tactical Whistle in every color. I'll give the pink one to the next girl I ask out as assurance...

One more reason not to whistle at a lady: she might whistle back at you. At 120 decibels like a mother f'ing banshee. NiteCore's NWS10 claims to be the loudest emergency whistle on the market. Based on the above YouTube...

Well, if you're looking to Captain von Trapp your children you will definitely need a Bosuns Whistle keychain. If not, maybe you'll just like this little nautical trinket as a shiny - 100% brass shiny! - new piece of...

I sure hope I never need to use a ShelterCube Extreme, but after what I "anonymously" mailed my tight-ass boss, I feel like maybe a storm's a-comin'...

Sometimes, actions speak louder than worries. Putting together a Kim Jong Un nuclear attack preparedness package doesn't just give us something to do besides sit around and worry about North Korea launching missiles and...

Panamanian inventor Morris Shahbazi once bragged to disbelieving ears that his SOS Parachute, an emergency evacuation system for people in high-rise office buildings, hotels, and residences, could open in 100 feet, or...

In Case Of Cabinets

In case of a zombie, vampire, werewolf, or demon emergency take this tiny sledgehammer, break the glass, and prepare to fight for your life. Or run like a girl while tossing Holy Water over your shoulder. In Case Of cabinets...

I see your bivy sack, and raise you the Terra Nova Bothy Bag, a lightweight emergency shelter erected and held in place by your own body weight and form. Or rather, your own and your friend Cornelius'. Or, given this...

Just one question about the TempTooth Temporary Tooth Replacement Kit: does it come in gold?...