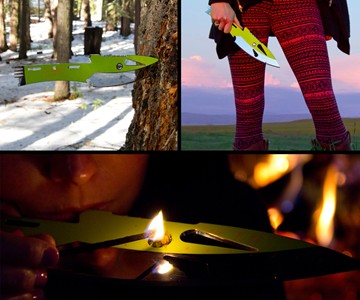 People around here seem to love knives and multi-tools. Multi-tools in particular are, like, the new bacon. Before, for at least a year, when I posted anything about bacon clicking fingers went hog wild (see: tactical bacon, bacon condoms). But people don't oink for the bacon novelties so much anymore. Now they drink the Kool-Aid of multi-tools (see: Leatherman Tread, KeyBiner). I imagine these too will run their course in the near future, but I doubt the Kniper is going to be he first to feel the effects of a saturated market. Because while Kniper is a multi-tool it, unlike most others, is also a 13" long x 2-1/2" wide throwing knife. And even more unlike most others, part of Kniper's 22-function multi-toolness includes a built-in "tobacco" pipe. For smoking "tobacco". Take a throw, take a toke, take a throw, take a....

Hmmm, sounds like a Darwin Award waiting to happen.

Kniper was designed first and primarily as a throwing knife. It is milled from a single piece of 420 high-carbon stainless steel, with weight distribution, metal composition, and shape all contributing to the knife's smooth flight and balls-on accuracy. Some of its 22 additional capabilities include: range finder; nail remover; saw; wire stripping pry bar; fork; bottle opener; screwdriver; and ruler. At printing, Kniper was available for pre-order, with the initial production run shipping in June 2015.

Leatherman's new baby Tread, a multi-tool worn on the wrist, is so brand new it hasn't quite popped out of the oven yet. But before you start leaving interminably clever, "This site should be called Dude You Can't Have...

The Schrade SCHA5B M.A.G.I.C. folding knife listing neglects to explain its M.A.G.I.C. acronym, so at first I thought maybe it didn't stand for anything, that the caps and dots are just there for their imposing, visual...

It's a little smaller than your average bat'leth, but this ode to Klingon weaponry still serves its purpose as a 6-in-1 EDC multi-tool...

The real best credit card multi-tool would be the one that finds the money to pay off all my credit cards for me. And then makes me a sandwich. But since smart tech and AI startups are still working to develop that particular...