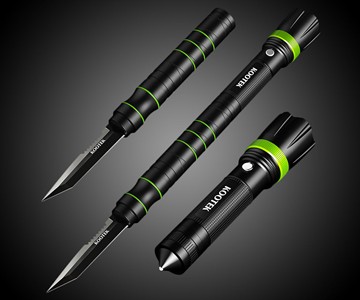 The multifunctional flashlight's XM-L T6 Cree LEDs burn 800 lumens in high, low, and strobe modes up to 500', plus are zoomable for pinpointed illumination. The light is also IP65 waterproof.

Unscrew the 12" flashlight's center seam, and you'll unsheath a 9-1/2" tactical aluminum alloy knife with a 3-1/2" long serrated blade. Use it to cut through rope, saw up some kindling, cut you up some steak--cooked or still raw and attached to its host--for dinner.

The Kooltek flashlight end doubles as an attack head, as does its tail end's hammer, which can be used to break window glass during emergencies, or whack a bad dude or animal on the offensive.

You can watch the video to see the Gotcha Cap in action, or click here to watch a GIF of it showing a punk ass watermelon what's up. Issued by FAB Defense, the Gotcha Cap is a covert self defense tool (and swell hat!)...

Budding knifesmiths can challenge their skills and forge the precise knife they want to EDC or display with these Damascus steel blank blades Poshland Damascus Knives has layered into an array of different patterns and...

Unassuming. Low-profile. Comfortable. Able to shatter wrist bones. Just the combination of qualities I've been looking for in a baseball hat. The Sap Cap takes traditional headwear to the covert weapon level with its...

Five seconds into a look through Triangle Krav Maga's Website and Facebook photo stream and two things become abundantly clear: these cats do not F around; and I would like an application to become one of them. After...

FireSafe Outlets were developed by a New York City firefighter who's battled enough electrical fires to make your hair stand on end. Replacing the covers of your existing home or office outlets, FireSafe Outlets detect...