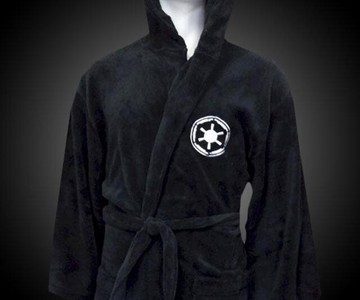 I decided to spotlight the Darth Vader bathrobe because this morning I got an email from someone named Anastasia Kryzinski entitled, "What Does Your Love Python Need?" I thought it was the best email I ever received, and I had so, so many answers prepared for Anastasia. But when I clicked the message open I found it was all about erectile dysfunction pills! Can you believe that? I don't even know if Anastasia is a real person. I'd like to think she is though. I'd like to think that someone hacked her email account...after she wrote her subject and addressed it to me...to infill that malarkey about Viagra. Which anyone who's read the story of my penis knows I do not need. (Except maybe if the girl has braces or excessive body hair, but that's a psychological, not a physiological thing.)

What this has to do with the Darth Vader bathrobe is that I was wearing the Darth Vader bathrobe when I received my Love Python email. It made me want to unleash the power of the Dark Side on all email spammers. But it was also so cozy in all its terry cloth, oversized-hood-and-sleeves grandeur that ultimately I decided instead of waging an attack I'd just go back to bed.

Like the Jedi bathrobe we previously showed you, Darth Vader's officially-licensed piece of wraparound loungewear is made of 100% cotton and features an embroidered Galactic Empire emblem at its breast. It hangs 47" long from shoulder to bottom hem.

Rihanna's Savage X Fenty lingerie line originally set out to disrupt the industry and redefine sexy with fashionable designs that are both affordable and suited to all types of bodies. The recently released Savage X Fenty...

WorkRobe - Business on the Top, Comfort on the Bottom

The WorkRobe is for working (from home) women who don't want to put on a stiff collared shirt or itchy sweater for one stupid Zoom call. Or, worse, to sit around stiff and itchy on video conferences all day long. Coined...

When mere pushing, grunting, and clenching every other muscle in your body while sitting on the toilet doesn't work, use the Force. Or at least stare at this Use the Force bathroom art hanging on the wall for some comic...

The Jedis may have the Force, but the Dark Side has power. Tons of it. Enough to take your iPhone, Android, or Windows mobile phone from dead to fully juiced and ready for battle. One round with the Darth Vader lightsaber...