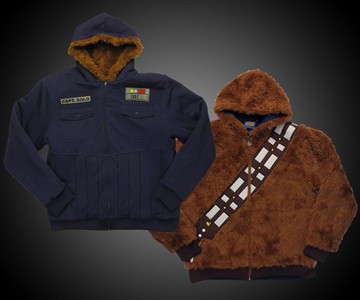 Life has been very difficult for some since the Mark Ecko reversible Chewbacca hoodie sold out. It was pretty much the Star Wars garment to end all Star Wars garments. But I like this new alternative alright too. Maybe even slightly better since when I'm not in the mood to full-on bare my Wookiee fur, it won't just temper me into a Rebel Alliance supporter, it will transform me into an entirely different badass character: Chewie on the inside, Captain Han Solo on the out. I can't lose! This isn't just a hoodie, it's the double-sided definition of awesome. Maybe even the 21st century equivalent of the mullet.

A heavyweight zip-up, the Han-Chewie hoodie sports Solo's Hoth parka on one side, and a full upper body of faux fur on the other. Chewbacca's trademark bandolier hasn't been forgotten either; it's embroidered as an applique across both the front and back of his half.

Ho, ho, h-oh no! Santa Claus has gotten himself into a Carbonite pickle! He might survive as Han Solo did, but wasn't Han also frozen up in the stuff for, like, a year? Bad news, kids. I wouldn't waste my time with cookies...

What took them so long? Although I'd prefer an Augustus Gloop drowning in chocolate bar, Han Solo's plight lends itself nicely to aiding in the fattening of America as well. Jabba The Hutt, although posing no long term...

Maker Volante Design calls this Assassin's Creed fashion statement the Kenway Jacket, and includes a lot of nonsense about how it is available with two closure options to make it either symmetrical or asymmetrical, but...

Michael Alen calls his Kickstarter project Hero HoodieZ. The first in what Alen hopes will be a series of superhero-inspired hooded zip-ups spotlights crime-fighting vigilante Nightwing. The hoodie, available in both...

You can now have Commander Shepard's N7 leather jacket in 100% Italian lambskin, modeled after the European racing style, and manufactured for BioWare by the same company that makes leather coats for Ferrari. That is...

Normally I would think something called a Sixer Insulated Jacket would insulate me from the cold. But when outdoor apparel brand 686 teamed up with Pabst Blue Ribbon, PBR had something else in mind. This special edition...

While it is abundantly clear that this image of naked Princess Leia draped in the hide of Chewbacca is just an illustration, looking at it still stirs up the strangest mix of revulsion and horniness within me. Chewbacca...

"I was under the impression it would hold molten carbonite as it states clearly in the title this is a carbonite MOLD and it's very poorly constructed for this purpose. Secondly, it's SMALL. No, you can't put people in...

Come on, Cousin Larry, don't be re-dikoolous, this is a niiiice jacket. I would wear it to my wedding. And I'd definitely wear it to your wedding. Machete 'N' Sons' Brocade Dinner & Smoking Jackets are part of their Decadence...