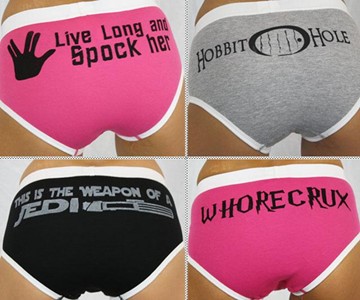 Did you get drunk and pee your pants last night? Did you throw your panties on stage during the New Year's Eve Super Diamond Neil Diamond cover band show? Did you sneak out of the bed you woke up in at 5:00 a.m. and leave your underwear behind because it wasn't worth potentially rousing the...ew, really?!...dude still in it scrounging around for them in the dark? In short, do you need some new underoos? Well here are a few replacement selections from Nerds with Vaginas, designers whose legion of boy-style briefs for girls are stamped with witty and provocative lines that leave no doubt they were created by some veritable nerds with vaginas.

All suggestions and allusions are printed on the ass of American Apparel unisex briefs (so sassy and carefree men can technically flaunt them too), and include such gems as:

Snakes and temptation always seem to go hand-in-hand, and this Medusa Bodysuit is no exception. Sssexy, sssee-through, and ssslithering with ssserpents that maybe will, maybe won't cover up a lady's naughty bitsss, the...

Last month this a-hole at my office left a box of Edible Anus chocolates on my desk with a note that said, "I saw these and thought of your face." Now everyone at work calls me Buttmuncher. Like we're 12! So for next...