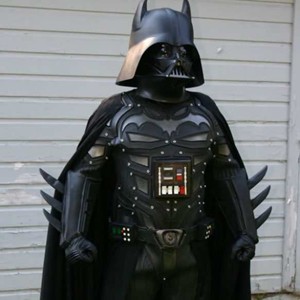 You love Batman, but you're a loyal Star Wars fanboy. Halloween is coming up and you have a difficult decision to make. Can you betray Darth Vader for your new crush on the Dark Knight? Good news. You won't have to. Mash those suckers up and please everyone involved.

This is a latex Dark Knight style front facade with vader ribbing, the suit is attached to a (XL) lycra rear zipper suit! This costume has a ton of features including a custom made urethane dark knight belt with removable vader belt boxes and removable vader skirt cape. On the chest you will also see a removable resin vader chest box. This Costume also includes latex custom made gauntlets with fins and leather gloves (size Large). The helmet has custom ears attached and has been secured and reinforced. Also included is a HUGE black scalloped batcape. This costume is also equipped with over 90 nuts to give the armor an industrial look as it was bolted on. The Darth Knight costume is ready to ship and ready to ware out of the box! The only part you will have to aquire is a pair of boots (as boots are not included).

The body builders at Flex Design Costumes might be the only body builders on earth who can guarantee they'll jack up, carve out, and rip your muscles to shreds with absolutely no effort on your part beyond telling them...

Sadly, this bodysuit covers more skin than the TRON corset, but since it's made out of stretch fabric instead of 12-gauge plastic, it does allow for increased mobility during re-enactments of the movie's action sequences...