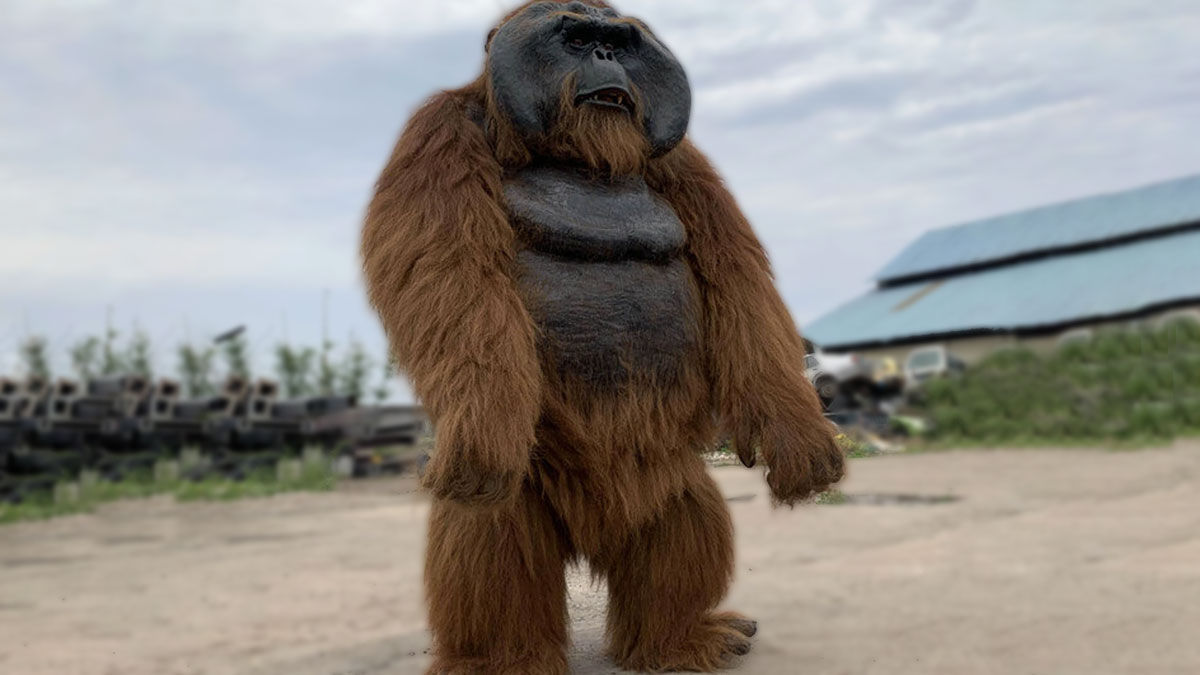 The ultra-realistic Orangutan Costume looks like an outstanding choice for Halloween. Or, like, life, if you're craving something different. Because, as they say, in today's world, if you're tired of being a software engineer, you can go back to school and completely change your career. Become a lawyer. Become a chef. Become a nurse. The same is true here. If you're tired of being a human, you can go to the internet and completely change your species. Become a shark. Become Groot. And, courtesy of MCS Dino, become an orangutan.

Or at least a human in an ultra-realistic Shark / Groo / Orangutan Costume.

Like the giant Ride-On T-Rex, the Orangutan Costume is another MCS Dino animatronic build, with moving eyes, mouth, and lips, and the ability to "knuckle walk." Sound effects are also included, but if you dudes are like this dude, you'll keep those off in favor of making your own.

I mean, I don't see Ali Larter in a whipped cream bikini anywhere, so dining can't be that wild with Mustard's Wild Dining Dinner Plates. But I guess drawing a ketchup mustache on a silverback gorilla, and giving the...

Its vendors describe this gorilla toting a human around in a cage as "the most incredible adult costume you've ever seen." And while the only way that statement could be even remotely true is if Kate Upton were wearing...

It's too late to order the King Kong Hand Halloween costume for 2020 Halloween - especially since girl-gripping gorilla getup has to ship all the way from Australia. But for those who need a last-minute costume for a...

Big fun with big beasts awaits with BigMouth Inc.'s Ginormous Inflatable line of yard sprinklers. This summer you can run through cooling waters showered down by the noses and mouths of your favorite animals, including...

Sure, King Corn will skewer and secure your buttery, juice-spurting corn on the cob so you don't get your hands dirty. But the porcelain gorilla might also bite your face off when you lean in to take a bite. I think I'll...

No Bigfoot were harmed...or spotted...in the making of this line of all-over printed Bigfoot hoodies and shirts. The 3D appearance of the hairy, nippley fashion is also an optical illusion - Aloha Zing says the sustainable...

These Feisty Pets are the perfect way to teach your kids about the true nature of animals. All cuddly puppy and squishy bear and magical unicorn at first sight, but get too close and...Rrrrrawwwrrr! Back the F off, son...

Lookee, lookee at the itty bitty crochet sloth. The teeny tiny crochet elephant. The weeeee little crochet penguin. The...I can't. I have to stop. All these Micro Crochet Animals, these things that make you go awww, are...