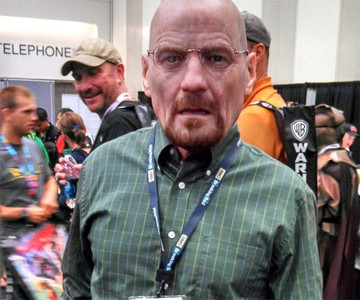 Worn, signed, and sweated upon by Bryan Cranston himself. Also mingled in: the DNA of Jimmy Fallon and Common, whom the Breaking Bad star let take a turn in this Landon Meier Hyperflesh Walter White mask at Comic-Con 2013.

Cranston first showed up wearing the mask "incognito", and while the masses never suspected Heisenberg was Heisenberg, I'm sure he still got a ton of double takes and high-fives, given how realistic Meier's handmade Hyperflesh creations are. Each takes months to mold, chisel, and realize in an expression that captures the spirit of the TV icons--or, as we showed you previously, giant, demonic babies--they represent.

Cranston ultimately removed his disguise onstage, and then, along with Aaron Paul, made out with his silicone self. Bravo to all involved with this disembodied head high jinks.

And bravo to Meier, who is now auctioning off the Walter White mask on Ebay. At printing it had achieved a high bid of $22,100. With over 5 days to go, that puts it well on its way to trumping the analogously nifty scale-mail guinea pig armor, which topped out at $24,300.

Officially the Heisenberg Mask #2, Walter White's lookalike shell is made of ultra-durable Dragon Skin platinum silicone. All hair was hand-punched. Meier has signed the mask along with Cranston.

Would LEGO ever produce and release a Breaking Bad Meth Lab? Probably not even if its CEO and Board of Directors were all required to inadvertently step on an errant brick once an hour, every hour of the day, every day...

Way to go, Walter White and meth heads, Breaking Bad has reached terrarium levels of popularity. Terrarium. I find that word difficult both to spell and to say aloud. Try it. Rough on the tongue, 'ey? Not very pleasant...

I won't tell you what you should and shouldn't use these fine Breaking Bad cutting boards for, but...you might want to stick to "Let's Cook"-ing actual food. Like, how about cleaving some birds for a nice Los Pollos Hermanos...

Ah, the Breaking Bad RV Incense Burner. [Cue nostalgia.] Reminds me just how much I miss the Krystal Ship. I can't believe it's been 4 years since Heisenberg & Pinkman cooked their last batch. I hope things turn out better...

Acrylic and mirror plastic are laser cut into comic book, gaming, and TV series favorites in these swell shiny necklaces. The danglers come as both singles and Friendship doubles--2 chains holding halves of the same image...

One time when I was in New Orleans this voodoo lady tried to sell me some bath salts under the guise that they would enlarge my manhood if I soaked in them while listening to Prince's "Sexy MF", but I said, "No thank...

Nearly 2 years after we thought Walter White sang his swan song, Argentinian illustrator Max Dalton has found him alive and well. Just strolling down the streets of Albuquerque hidden in plain sight. So where's Walter?...

Well here's your answer: No. Not even the country bumpkin flowers and granny pastels of a cross-stitch sampler can make Walter White look any less badass. Breaking Bad's chemistry teacher/meth brewer extraordinaire makes...