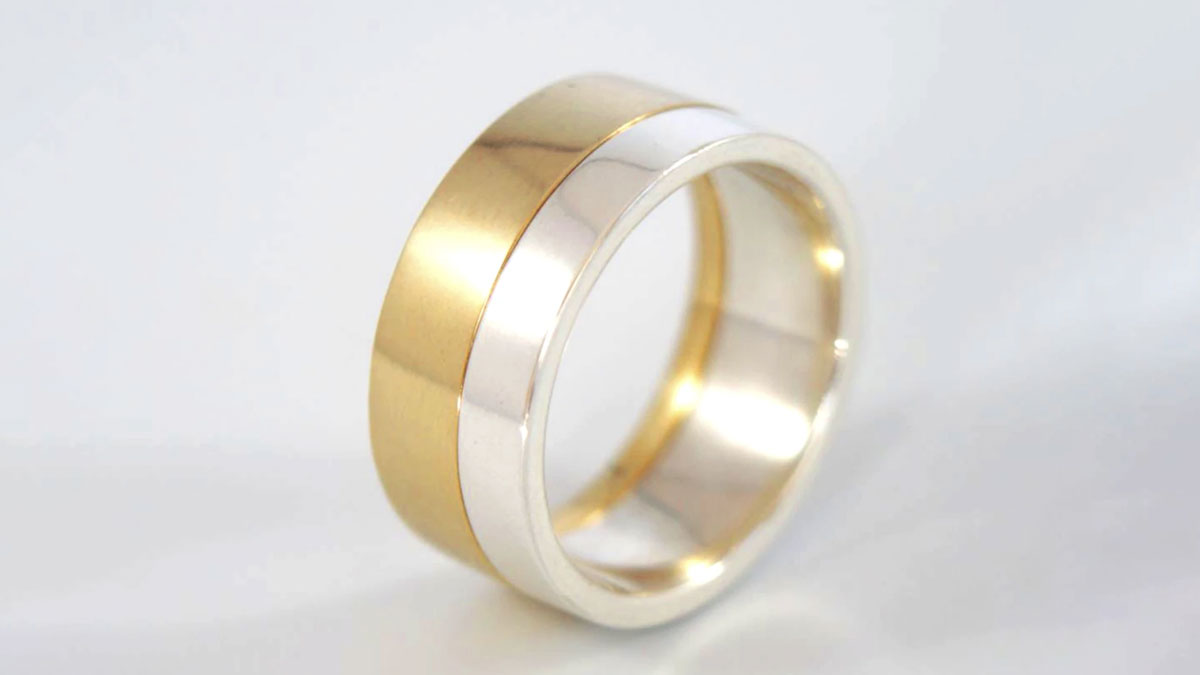 When Kristen and Gavin Smith got engaged, Gavin was as interested in bejeweling himself in commitment as Kristen was. But in looking for male engagement rings, they found a dearth of options available, particularly since they would eventually pair both rings with wedding bands. Research indicated other men felt the same, and a desire for dudely engagement rings was growing.

The Smiths came up with the idea and design for Collide Connecting Rings in response.

Collide Rings connect via a fastening mechanism the Smiths developed and patented to help the two together. Prior to marriage, you'll wear the Collide Engagement ring with an insert that protects the fastening mechanism. At the wedding ceremony, the insert slides out, the wedding ring slides in to replace it, and the rings fuse in a forever bond right alongside the one you make with your "I do." (Note: also like marriages, the Collide Rings can come apart.)

Question for Beyonce: if you like it, is it OK to just put a Ring Mug on it? Yeah...I didn't think so...

Shine bright like a...piece of Patagonian virapita wearing this titanium band engagement ring topped with a radiant-cut piece of wood. A good 3 carats from the looks of it...

The story of Manly Bands wedding bands starts with a proposal and ends with a couple taking two sets of vows: one to each other; and the other to people like themselves who are "horrified" with their experience of shopping...

Do you really want to irritate your wife? Then demand that this be your wedding ring. Why not? Kind of makes a statement to would be criminals too. You're a dude wearing a black steel ring... you're a dude not to be messed...

Wallis Reid's line of men's wedding bands and engagement rings are stunners in 18K gold, oxidized sterling silver, and raw diamonds. Dark without going goth, wild without looking messy, if you're a dude into statement...

I wouldn't normally appreciate a schmoopy design like The Kiss Teacup & Saucer, but Mila Arkhipovat's kissy-face couple brings as much creativity and refinement to the table as they do schmoopiness...

Marry me and come to the Dark Side! Come on, ladies, even in you're not into Darth Vader or Star Wars, you gotta indulge any man who presents you with a Vader helmet engagement ring. If for no other reason than the license...

When you can't remember if Mama said you can't hurry love, or if Mama said knock you out, it's best to cover all bases. These gleaming symbols of betrothal let everyone you encounter know you are blissfully off the market...

Lovers Under the Moon Lamp

It's time for summer lovin'. The Lovers Under the Moon Lamp captures that over-the-moon feeling of cuddling up with someone you love, in the quiet of night, surrounded by stars, and watched over by the pizza pie in the...

Ah, an engagement ring symbolic of your move to the Dark Side. Married. The Death Star engagement ring from Alien Forms Jewelry is far from the first Star Wars jewelry we've seen, but I think using an evil, death-dealing...