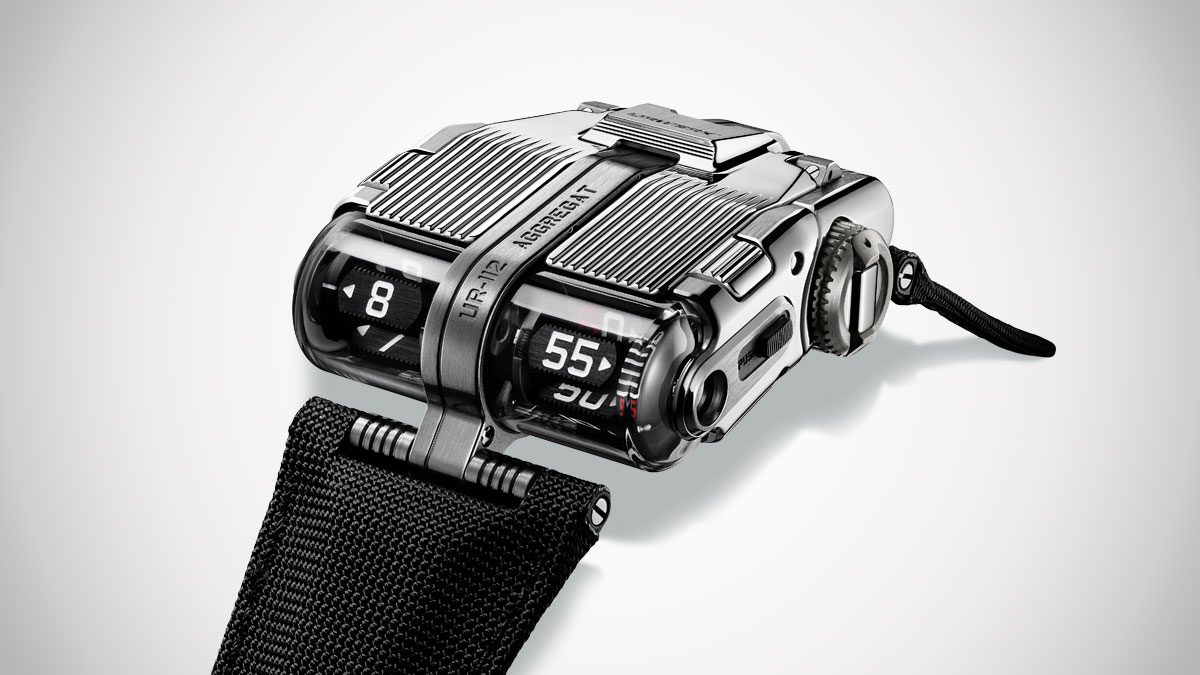 URWERK certainly likes their sci-fi. Not just in designing the the Aggregat Odyssey, a limited edition take on their retro-futuristic UR-112 Watch, but also in describing it. Featuring a new titanium and steel fuselage, the UR-112 Aggregat Odyssey arrives, according to URWERK, "gleaming like Padme Amidala's J-type 327; equipped with two large round eye-like windows like Archie; the 'owl ship' from Watchmen. Streamlined like a Klingon Bird of Prey. Grooved like the hull of the Battlestar Galactica."

Sheesh. Talk about a sci-fi mouthful. Not to mention the perfect watch gift for a geek. A very rich geek. Poor geeks can stick with their Casio Calculators.

The UR-112 Aggregat Odyssey is a deliberate mashup of surfaces and finishes, a timepiece that segues from flat to curved to grooved, from matte to glossy, and from sandblasted to polished pretty much in sync with the imagination of an 8-year-old. Combined, of course, with the artistic sensibilities and technical proficiency of a luxury Swiss watch brand.

Timekeeping on the Aggregat Odyssey is fully digital, down to the second, and displayed in 2 "cockpits" on the front, rather than on top of the watch. Flip open the top lid to access 2 more Aggregat Odyssey windows, showing the seconds ticker and a power reserve indicator. The watch case is 42mm wide x 51mm long x 16mm thick.

A smartwatch you need charge only by...doing smartwatch-y things with it? Sequent's SolarCharger Smartwatch is a timepiece that also monitors your activity, sleep, and heart rate, and can potentially do it all in perpetuity...

Nyx describes their IN16 Nixie Tube Watch as a "retro-looking futuristic...trend that never fades." Having been at my Dudely duties now for 10 years, I have to say, I completely agree. What is it about these Cold-War-era...