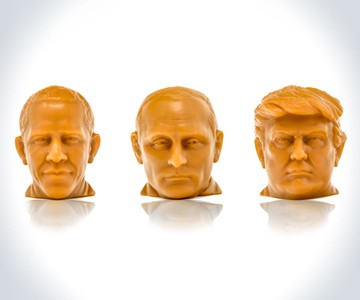 $12
from Hot Head Candles »
Check It Out

No one can say these famous (and infamous) politicians and world leaders (plus Albert Einstein) aren't hot heads when they have Hot Head Candle wicks sticking out of their heads.

Will Markusen creates his whimsical - and spot-on realistic - wax burners from silicone molds he prints on a 3D printer. What started with a glorious orange Trump Head gag gift to friends and family eventually became an entire online shop of Hot Head Candles, including the Obama and Putin beauties you see above, as well as burn-bright likenesses of Kim Jong Un, Hillary Clinton, Joseph Stalin, Ronald Regan, and Abe Lincoln.

Markusen intends his Hot Head Candles as lighthearted ambience, "to serve as a reminder that no matter how much we may despise a sitting president, senator, governor, or other world leader, their political role is only temporary - just like the flame of a burning candle."

While I would prefer a wax color more masculine than pink, I--What? Pink is the color of unconditional love and nurturing? Oh. OK, Mama.--I guess my mama likes pink. Yep... Working from home today... Anyway, I applaud...

WTF does using the term "WTF" in reference to a candle mean? In a nutshell: "Mmmm, this smells incredible! Just like the apple pie my grandma used to make with the shortbread crust and the...gaaaaasssspppp!. W...T...F...is...

Diamond Candles makes candles (duh) with embedded diamonds (du...really?) Each candle is guaranteed to contain a sparkly ring for its burner to discover as the wax diminishes. Granted, they're not all diamonds, and they're...

I'm not really sure why Woo More Play's sensual massage oil candle is named "Eat Me Out for Once." As far as I can tell, the muscle-rubbin' lube the melting wax of the candle produces is scented with sandalwood, papyrus...

Man Cans. Scented candles for men. No. For Men. Endorsed by Thor, Indiana Jones, and the Dos Equis guy. This one smells like a spent shotgun shell. At $9.50, it also smells like I'm done looking for a Father's Day gift...

How precious. A floating puff of plant with an LED light at its end. Though overpriced by a factor of 8, the Torch Plant Light Botanical Candle is a clever centerpiece designed by Japan's Pianta x Stanza to look like...

Nothing like a hot day in the south or the Ark of the Covenant to make you feel like your face is gonna melt off. Though after my wee and innocent 6-year-old eyes were scarred for life watching Major Arnold Ernst Toht...

The Dissim Inverted Lighter turns the flames of Hell upside down. OK, more like one little flame. And I guess it's not from Hell, it's from butane...

Interestingly, the Tea Light Faux Fireplace Log looks like no less of a fire hazard than a real fire in a wood-burning fireplace, and not all that much easier to light either. But I guess if your firebox and flue aren't...

Here comes the Earwax Candle Kit just when you thought you couldn't find the perfect gift for your mom. I don't know about yours but I know my mama loves candles, and also hates waste, and based on the number of used...