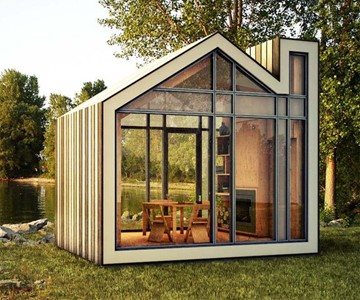 Industrial design firm 608 Design and architectural design firm BLDG Workshop teamed up to build the Bunkie, a portable, eco-friendly, prefabricated retreat structured such that the Big Bad Wolf will pop many a cranial blood vessel, and maybe even induce an aneurysm as he tries in vain to blow it down. Bears, though, I'd watch out for those crafty SOBs. My friend Victor just told me a story about some guys who went camping far away in the Upper Peninsula of Michigan and their campsite got descended upon by a black bear and they tried to scare it away by waving a flaming stick in its face, which worked the first 4 or 5 times, but then the bear was like, "That's about enough of this shit," and whacked the fiery branch to the ground before chasing them into a lake, where they waited freezing their asses off for a couple hours while the bear went back and ate every speck of food and beer they had, and then systematically destroyed their tent and all of their camping gear. They had an 8-mile hike back to their car the next day without so much as a functional zipper or an ounce of water. Whaddaya think of that, Bunkie? Can your CNC-router-made frame and glass facade withstand the forces of ursine-infested nature?

Still in the production stages leading up to public offering, the Bunkie hopes to maintain the simplicity and low carbon footprint of a no-frills outdoor shelter, without sacrificing the beauty of an architecturally-calibrated home. With three operating modes, open, play, and sleep, Bunkie's plywood and reclaimed barn wood interior can accommodate daytime installations, such as a dining table or loungers, as well as bedtime requirements in the form of its 2, queen-sized murphy beds built into its main wall.

If the UK's Spitbank Fort didn't look and sound like post-apocalyptic luxury at its finest to begin with, its location in The Solent, a major shipping route along the Isle of Wight, should cement the status. The Solent?...

Plat of land, plop down a Honomobo. It's what I keep telling my girlfriend when we talk about trading in her condo for a house. See, like the Simpsons, we live in Springfield, and home prices are ludicrous right now...

When the item in question is a house, how do you define "portable"? For me it was always the train car-looking mobile home my grandma's cousin Ella Mae used to live in that could be dragged from city to city in Florida...

Looper pods deem themselves portable, eco-friendly, pimped-out resorts modeled after the ultimate pimp mascot: the caterpillar. Yeah...I would've gone with some sort of spiny-backed reptile or ancient dinosaur or Bowser...

I'm nearly sold on AbleNook, a collapsible housing unit that requires neither appreciable time nor skill to assemble, based on its Kickstarter project's opening quote alone. From Albert Einstein: "We can't solve problems...

Home remodels, upgrades, redesigns, and refreshes are still at an all-time high, with the pending arrival of cooler weather and, probably, more COVID indicating to me the Hygge-my-home thing is going to be a favorite...