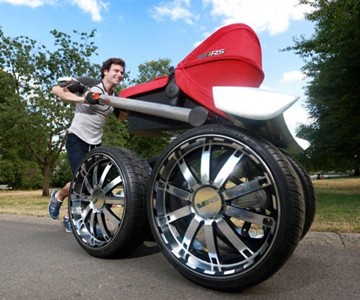 At the end of the day, you'll still be a dude pushing around a baby...or a pomeranian...in a stroller, but at least with Skoda's Man-Pram you can mow the fuck over anyone who gives you shit about it.

The Czech car manufacturer unveiled its masculine-charged concept for buggy-pushing papas after results from a British study found that 33% of dads in England find pushing a conventional stroller embarrassing, and 25% refuse ever to do it at all, leaving pram mobilization efforts up to their wives or whatever woman happens to be closest to them on the street. Dude Suggestion: How about calling your strollers something slightly less sissy-sounding than "pram", British people, so the thought of the object won't stir up images of a dainty fairy with a stick up her ass? Kind of like how when American men wear purses they call them "shoulder bags".

The vRS Mega Man-Pram is a supersized concept buggy released in conjunction with Skoda's Octavia vRS car. If mass produced dads the world over will be able to elbow grease their babies around town in a stroller with 20" alloy wheels, wing mirrors, hydraulic suspension, oversized brake calipers, anti-stress grips, and a headlamp beam for nighttime walks. No word yet on whether or not the Man-Pram will have a built-in alternative to contorting your face and cooing high-pitched gibberish to the kid in a desperate effort to make it stop crying.

Oh, man, has the Dude got some approved gifts for you. Not just a dozen, and not just two dozen of them...oh, wait. How many is two dozen? 24? Right, then. The Dude has exactly two dozen approved gift ideas for men this...

Uh, do they make a SnoozeShade Pack & Play Blackout Crib Tent for adults? Because ever since turning 40, all I've wanted to do at parties and social gatherings is go somewhere and take a nap about an hour in. My wife...

First we saw the Japanese Shouting Vase, an ABS resin stress-reliever that mutes the wails of angry or frustrated souls who need to unleash their fury without disturbing the peace. Now the brilliant minds of Japan--perhaps...

There Are Moms Way Worse Than You

Horizontal is certainly my favorite way to do most things, so why wouldn't it appeal to parents too? Horizontal Parenting: How to Entertain Your Kid While Lying Down is a manual for moms and dads who just need a frikkin'...

The Ready Rocker Portable Rocking Chair is well suited for getting babies to stop fussing and rocking them to sleep. So I'm definitely getting one as a gift for my wife, She-Ra: Princess of Power...