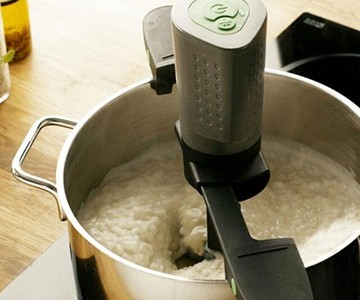 Life hacking innovator Unikia adds the Stirio to its online showroom of tools that will expedite and elevate the filling of my belly. We previously saw the Compleat FoodSkin flexible lunchbox, a simple trick for keeping mile-high foot-longs intact during transport. Now with the Stirio we have a righthand man in the kitchen that will, well, return to us the use of our right hands.

The automatic pot stirrer can churn an entire family-sized vat of stew, oats, risotto, or specialty concoctions of chocolate, marshmallow, and Sriracha for up to 45 minutes straight. Unassisted, unattended, and uncomplaining. Just like children in the 19th century, before they all became belligerent, self-entitled little narcissists! Stirio has adjustable axle arms and two stirring speeds, so it will accommodate a wide range of pot sizes and types of dishes requiring lengthy periods of agitation. All of its parts, less the motor, are dishwasher safe.

Stirio runs on rechargeable batteries, and includes its own charging station. While it is up for even the toughest of stirring tasks, it would really appreciate not being charged with stirring clam chowder, because clam chowder makes it want to vomit.

If you want an electronic gadget to do your wrist's grunt work for a fraction of the cost of the Stirio, you might check out the Robo Stir.

Ah, the Jettle. For all you jet setters in the worlds of travel mugs, electric kettles, and boiling water. Here I was thinking my Star Wars Corkcicle and Stagg were the snazziest of s

She waits. She lurks. She stalks. And then suddenly, out of the depths of my 8-quart stock pot, Nessie emerges. Oh the terror! The foreboding doom! The...hey, what's the Loch Ness Monster got in tow there? Is that a ladle...

Eat like a pig...er, I mean, a man...a man pig (!) with The Man Fork from Clever Donkey. With 50% more tines than the average fork, this 6-pronged piece of silverware will have you spearing steak, scooping stir fries...

Spaghetti that slides off your fork or won't catch when you try to twirl it? For-Ghetti 'bout it...

Eat it or wear it, that's what my grandma used to say. It was meant to be a threat, but now that I see this delightfully loud and obnoxious Ramen Hoodie, I think I would like to retroactively choose the latter. I'll wear...

Nobody describes a pair of multi-tasking snacking chopsticks better than Snactiv themselves: "A completely unnecessary but very cool snacking tool." And it doesn't stop there. Snactiv continues, in words after my very...

Han Solo, poor bastard. First Vader froze him in Carbonite, and now fancy French cookware company Le Creuset has cooked him in cast iron. Coming November 1, 2019, to a very tiny part of a galaxy only as far, far away...

Father-son lightsaber battles over Kung Pao chicken are about to get the LED treatment. Original lightsaber chopstick fabricator Kotobukiya continues its journey through their Galactic Republic of Replica Awesomeness...

It's no Sears Tower* glass Skydeck hovering 1,353 feet above the streets of Chicago, but at least this transparent stock pot is a lot easier to haul home, and way less likely to make you vomit. Well...unless you're a...