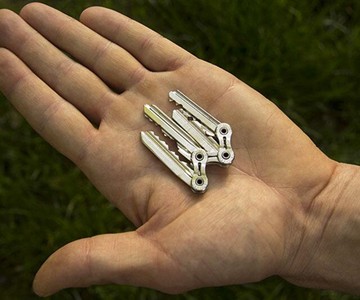 $49
from Kickstarter »
Check It Out

According to the TIK keychain and the sagging bulge in my left pants pocket, 75% of a key's mass is useless. So TIK creator Daniel Farkas hacked off the proverbial fat, attaching only the meaty parts of his keys to a stripped-down design he says not only maintains their original function, but improves it by expanding grip surface and providing greater leverage for each key on the chain. The resultant TIK could be the lightest and thinnest keychain the keychain-toting world has even seen.

Also, TIK achieves these superlatives through its use of a standard bike chain.

TIK keychains are made with the chromium carbide-coated steel pins and cro-moly steel plates of Yaban SLA bicycle chains. These deliver a TIK surface that is no thicker than the blade of the keys it holds. (Well, 80% is the same thickness and the other 20%, the chain structure, is 2.4mm thicker.) The extreme minimalist design and hollowed metal nature of the bike chain also render TIKs 40% lighter than standard keyrings.

According to Farkas, even those who aren't minimalists when it comes to the big fat wad of keys they schlep around can use a TIK to lighten their load, as his keychains are a modular system that can expand and shrink to pretty much any custom size. In addition, whether a TIK is holding 3 keys or 8, its thinness remains constant.

Backers of the TIK Kickstarter campaign will receive their choice of 1 to 6 key blanks from TIK's list of available blank options--they currently have 48 of the most popular blanks in use in the United States, which they say covers around 95% of all keys. Once in hand, TIK owners can take the blanks and their current keys to any locksmith for transfer to those suitable for bike chain storage.

While all bike chains used as Kickstarter rewards will be brand new, TIK hopes to incorporate used chains down the line as part of a recycling program to show their eco-friendly nature, and probably to get some tax breaks. Also to come will be non-key TIK attachments, such as USB memory sticks and bottle openers.

Pledge for your ultra-thin, ultra-light TIK bike chain keychain on Kickstarter through July 3, 2014.

The MecArmy SGN4 is a USB-rechargeable LED flashlight with 160 lumens of power and a 40-meter beam projection distance stuffed into a case sized for keychain EDC...

I'm not gonna be a wet blanket and diss these Light Bulb & Fan Pull Chains for ceiling fans because it's really not that hard to look up and figure out which cord controls the light and which cord the fan. Nope. No wet...

Self defense or self-inflicted injury? Swingin' 'round this full steel bracelet like a chain whip without really knowing how to swing 'round a chain whip, it could really go either way...

OK, this is like the Goldilocks & the Three Bears of tritium keychains. The first set we featured was by far the coolest and most coveted, but also the hardest to acquire. Many readers deemed the task impossible. Then...

In many senses, Glowrings have nothing on the tritium keychains we previously showed you--the ones super-sickly designed and flawlessly handmade by a dude who goes by the name of iknitsteel (though I think his mama calls...

The Keyport Slide 2.0 masters the art of consolidation. Consolidation. I like that word. It conjures images of culling junk, making things tidier, increasing manageability and pleasantness. Even when I'm told that we...

Sure, Glow Rhino's tritium-studded tools will add some swagger to your EDC. But when things go dark, and the self-powered light source kicks in to glow neon bright as a beacon to your keys, your beer cap, your roaming...