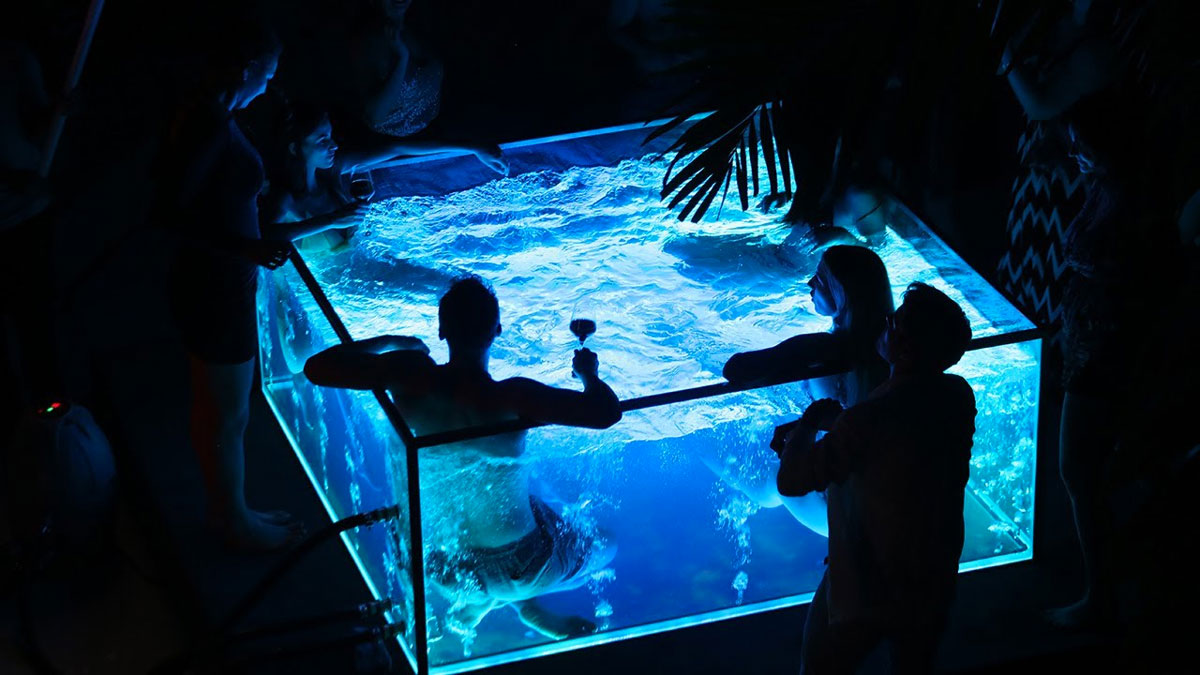 Now this is a hot tub that looks like a time machine. The ASB Nautilus is the world's first all-glass hot tub. And to further highlight that feat of physics, ASB has lined their whirlpools' floors with RGB LEDs in customizable colors, all of which look ready to transport you back to a circa 1986 ski resort.

Nautilus hot tubs consist of 5 sides of safety glass reinforced with minimalistic stainless steel on the corners. The bottom panels are non-slip and, as mentioned above, where the LED magic happens. They come in Mk I, Mk II, and Mk III models, each with more lights and features than the last. The Mk I has a 5cm wide RGB LED strip running its perimeter, while the entirety of the Mk II and Mk III floor panels are covered in evenly spaced LEDs for full immersion in heat, light, and mood.

None of the glass LED hot tub models has jets or bench seating, which ASB tries to explain away as gimmicky, even though they've just created a transparent hot tub that puts on a neon light show under the asses of the people using it.

Testicuzzi - Jacuzzi for the Nuts

Sadly - or maybe thankfully? - there are no photos of the Testicuzzi in action. At least not any this jacuzzi for the nuts' makers have published publicly. But one look at the empty hot tub - its contoured rim, its dual...

One time a couple of minutes ago I saw a patio that turned into a swimming pool! That's crazy! Almost Fletcher Capstan expandable table proportions of crazy, and definitely more in compliance with my agenda of spending...

Indoors, outdoors, on a dock in the middle of the river with a thatch roof on top. The Softub is the kind of hot tub that goes where and does what you tell it to. Without lip and without draining your wallet...

"SOAK" is Japanadian for "total body restoration." The BC-based design and fabrication firm Ox + Monkey designed...and fabricated their hot tub after the Japanese Ofuro, a deep soaking tub traditionally made of aromatic...

The 17 Best Gifts to Warm You Up & Keep You Warm

In paradise, you take a Horizontal Shower. You lie on a smooth, warm slab of tile as 6 falls of water cascade like mermaid kisses onto your tired and thirsty skin. You choose their intensity and temperature, their pattern...

Be Stillness my heart! Kohler's Stillness freestanding bath, a whole spa experience tucked into a trendy smart tub, won't be available until the end of March 2022, but I'm sure my wife - and yours - will accept an IOU...

Not only does ALFI's Fire Hot Tub look like a slice of a cartoon spaceship, but its "engine" is a wood-burning fire pit. No electricity, generators, plugs, or drain connections required...

La Scala's pimped-out jacuzzi, termed a "Jetted Entertainment Bath", is just another in a long line of life's Catch-22 creations. It costs $40 grand, so if I could convince the bank to give me a loan for it, I'd probably...

The Zento hot tub gazebo and its surrounding bar have one thing to say: and you thought a 12' skeleton was the Home Depot find of the year...