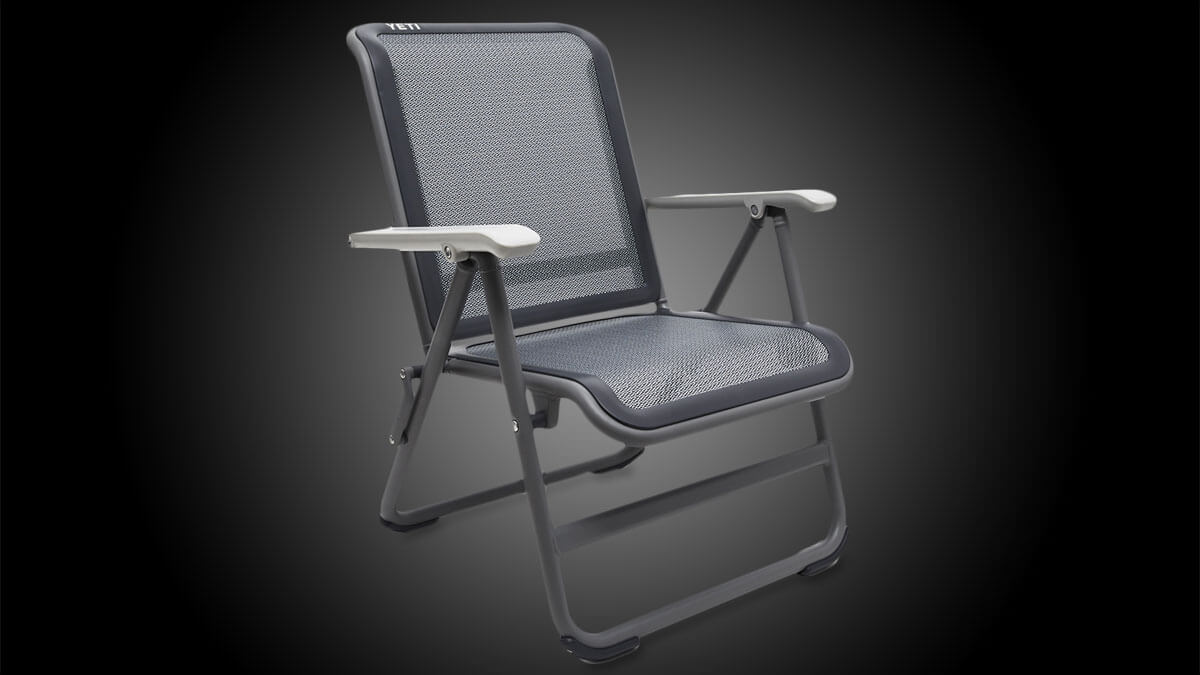 The empty weight of YETI's forthcoming Hondo Base Camp Chair is a hefty 16-1/2 pounds. But I think its load bearing capacity more than compensates for the additional load it imposes. During testing, the chair's break point was over 3,000 pounds. Meaning no ass on earth is going break a Hondo.

Correction: no human ass. I just Googled, "How much do elephants weigh?" and it's way, way more than 3,000 pounds. African bush elephants are the world's biggest and heaviest land animal, and they have clocked in at up to 23,000 pounds! And even that is only a fraction of the nearly 400,000 pounds some blue whales have weighed!

Not to detract from the Hondo Base Camp Chair's durability though. YETI still built it sturdy enough to hold the largest of our species. And the largest of the yeti species too for that matter.

YETI covers the Hondo's burly, nearly-indestructible frame with Easybreathe Mesh built with equally nearly-indestructible Flexgrid technology. The effect: the Base Camp Chair will hold you without losing its shape, and without forming pressure points that make sitting in it uncomfortable after 15 minutes.

Additional Hondo Base Camp Chair features include solid, cast joints like the ones used in truck door hinges, a seamless over-mold that won't break or tear, and a hauler handle built in to the frame so you can lug the Hondo around.

YETI anticipates releasing the Hondo Base Camp Chair in the spring of 2018, at which point it's going to make a faaaantastic Gift for a Man.

Oooh, the Star Lounger looks like something straight out of the mind of Tim Burton and the Deetz house in Beetlejuice. It doesn't have any mechanical components, though, so the star's arms won't fold in for a hug / restraint...

If you think the Malicious Bar Stool is, er, malicious, check out what designer Merve Kahraman based her design on: ancient times' "Chair of Nails Torture," seating dotted with impalement-ready spikes, and used by inquisitors...

How did Lull World create a zero gravity hammock chair that's portable, ergonomic, and transformable to suit everything from a day working in the office to a day lounging in the park? They just threw together a 'lul'...

The pinnacle of functionality and comfort and it looks like a scorpion? At nearly $6,000, the Emperor 1510 workstation may require a CEO-sized wallet for purchase, but given that owning one may actually make me want...

Though I am not a tennis fan, given that the opening line of Animi Causa's product copy for their balls lounger is, "The Feel Deluxe is made of 120 soft and extremely pleasant balls," I am very happy that it's the tennis...

Welp, at least with the wearable Chairless Chair you'll never have to worry about someone stealing your seat. Or forgetting to save you one. Or expecting you to stand for the entirety of their lecture about your inability...

Lean back, take a sway to and fro', and have a little look at the night sky with NEMO's Stargaze reclining camp chair. A portable seat that swings & leans, leans & swings, the Stargaze looks to help you relax after a...

Turn yourself into a life-size, real-life Weeble with the Restless Rocking Chair, a whimsical piece of kinetic furniture from Czech designer Karel Matejka. Though termed a "rocking chair" for simplicity, the Restless...