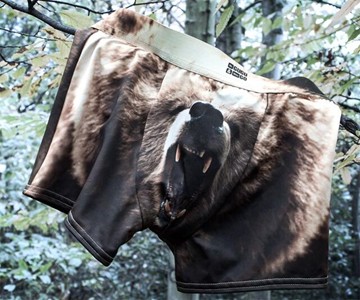 Snarling grizzly underwear have emblazoned shots of Kings of the Forest on both their front and back sides. Each has been trained to warm, cradle, and protect, as well as inject assigned manhoods with some of their ursine fire. But hopefully not their ursine aroma. Bears reek worse than 100 people on a windowless bus home from Burning Man. That dizzying smell, ma'am? Oh, it's just my bear pubes.

According to the Edison-caliber inventors of these underwear, the 100% polyester boxer briefs have been hand-crafted by virile Polish seamstresses. They have no flap. Because the last thing anyone ever wants to be unable to un-see is a wiener poking out of the mouth of a grizzly bear.

Schweddy balls begone! Boxerkilts are boxer briefs whose front skirt flap takes the place of the traditional C&B pouch, allowing for, if Boxerkilt is to be believed, 100% airflow to and through your stifled junk. The...

ABananaCover might not be as sexy as a banana hammock, but these naked feeling boxer briefs sure look a helluva lot more comfortable 'round back than the flossy fabric of a thong wedged between my butt cheeks. And made...

Although these personalized name or message thong underwear are super...duper...sexy, I could never ask my wife, She-Ra: Princess of Power, to place a chain link g-string between her cheeks. I mean, eek. Talk about a...

Did you get drunk and pee your pants last night? Did you throw your panties on stage during the New Year's Eve Super Diamond Neil Diamond cover band show? Did you sneak out of the bed you woke up in at 5:00 a.m. and leave...