Make Your Co-Workers Hate You Pen 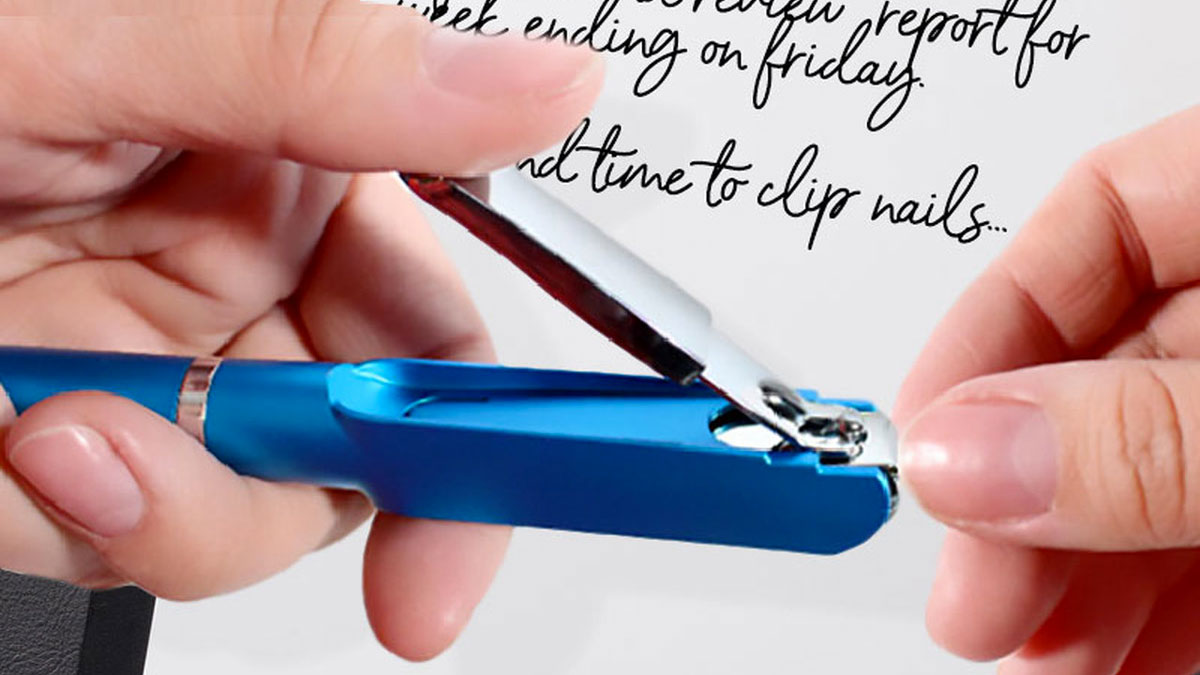 Never has there been a more aptly named product than this Make Your Co-Workers Hate You Pen. See, it's a pen, normal in every way, except for the clip at the end, which is a pair of mother F'ing nail clippers!

Removing small bits of your body at the office - especially when you let it pile up on your desktop before making a half-assed attempt to brush it into the trash - is never going to score points with the co-workers. But for me personally, I would much rather sit next to a guy biting his nails or a lady picking at her cuticles, or a whole row of people pulling out hair and eyelashes and maybe even boogers, than I would someone using a nail clipper. That sound! Curses! It's my nails on a chalkboard.

So much that I was tempted not to talk about this god-forsaken nail clipper pen at all, but I wanted to run a little test.

Everyone I know - co-workers, my wife, my friend Cornelius, my mama - assures me they never look at the site or read my writeups because they're lame. Well let's. Just. See. If I end up with a Make Your Co-Workers Hate You Pen under my pillow, in my Christmas stocking, or in the Secret Santa gift exchange this year, I'll know they're lying. My work is enamoring! A guilty pleasure no one can resist!

Perpetual Kid calls their Make Your Co-Workers Hate You Pen the best worst gift ever, and I wholeheartedly agree. In addition to the metal finger and toenail (oh yeah, had you thought of that?) clipper, the pen also has a built-in nail file to ensure your sloughed claws don't just get embedded in cracks and carpets, but waft about the whole office, dusting the largest surface area possible with your DNA.

I'm gonna start the New Year right, with a resolution to Takumi No Waza Green Bell Nail Clip my nails when they get too long or split, instead of biting the shit out of them...

Ready for a little DIY, at-home snip, snip? This time for your fingernails and toenails, rather than your vas deferens*. SZQHT levels up your cheap and crusty nail clippers with their line of ergonomic, wide jaw trimmers...

When it comes to cutting your own hair, Remington really has your back. Well, with their Vacuum Self-Haircut Kit, they mostly have your head and neck, but if you're bushy in the torso area...and lower...I'm sure you could...

I'm not trying to make self-haircut kits a recurring series or anything, but they are an item of high interest right now, and the Philips Headgroom, DIY hair clippers with a head shaver attachment, bring a little something...

Time to learn a new skill...and maybe learn to love a new haircut. The Remington Shortcut Pro is a self-haircut kit that could see a big surge in popularity if barber shops and hair salons remain closed for the foreseeable...

The Manscaped Lawn Mower 3.0 knows that even when we're stuck inside, many of us are living in the wild. This groin trimmer and happy trail blazer wants to help hack through the brush and bush - a lot more gently, and...

If Zwilling J.A. Henckels' grooming set contains tips and blades as sharp as the company's kitchen knives, any dude who gets this luxury collection of tweezers and scissors and clippers is going to look clean and dashing...

Battery-operated nail trimmer, um, no thank you, sir. Actually, my heart is pounding so fast and the knot snowballing in my stomach growing so large right now, I can't even muster the pleasantries. I'm just going to go...

Gah! Gah! Gah! This nail fungus repair pen is fine, great even, in and of itself, but Puriderma's Proof That It Works! photos? Gah! Gah! Gah! I'm about to lose my lunch, and I haven't even had lunch yet today. Toenails...

Feet. Love 'em or hate 'em, you gotta take care of 'em. And if you're game to give some funky foot care a whirl, these items certainly bring the funk, and are ready to toe jam with you. Enjoy my compilation of strange...

They call this a rechargeable "pet" nail grinder because it's designed with 3 different ports in its safety cap to accommodate large dogs, medium dogs, and small dogs. Uh, and cats. Cats!...