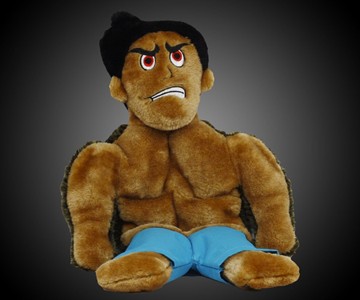 It's fuzzy stuffed hedgehog meets 'roided out meathead in this toy for your dog that you'll probably buy just as much as a gift for yourself. Outward Hound's Tuff Guy dog toys squeak, grunt, and huff for your pooch while their bulging pecks, 6-pack abs, and flexing-or-just-constipated? expressions pump [clap] you up as you watch the two play.

Or, more likely, watch your dog rip Tony, Hank, or Lars apart faster than the bodybuilders can do a set of power curls.

Oh yes, the Tuff Guys have names. Tony, pictured above, is described as a former boy bander who began questioning the manliness of his music after the group failed to produce a second hit after "Layers of Love." He rebelled, got kicked out, and then channeled his anger and despair into his workouts, eventually winning the World's Strong Dude competition 3 years in a row. Mustachioed Hank grew his mus-kles at a young age, working in his daddy's lumber yard. As an adult he parlayed his strength into 72 straight UXC wrestling titles. And bald Lars has been bald his whole life. Because, he has always said, "Hair doesn't grow on steel." Lars is a former European hockey player who retired to Montana, where he's now pursuing country music fame.

While the Tuff Guys are no longer active in their body pumping and brute force pursuits, any of them would still be happy to throw down with your boxer or labradoodle.

By the way, when I say "fuzzy stuffed hedgehog meets..." I mean it. Check out the Tuff Guys' backs. Yikes. If they survive Fido's jaws of destruction for a month, I think you owe them a series of laser treatments.

"Just text us when you're here. No need to knock and get the dogs involved." Whether you're a pet owner or not, this doormat sends a relatable message. And since anyone who comes over is certainly on their phone right...

The body builders at Flex Design Costumes might be the only body builders on earth who can guarantee they'll jack up, carve out, and rip your muscles to shreds with absolutely no effort on your part beyond telling them...

From the Nordic Society of Invention and Discovery - yes, that's a real society, not one made up by Wes Anderson - comes No More Woof, a device that lifts up the latest technology in micro computing and EEG, and plops...

Yep. That disposition looks about right for a baby in an octopus costume. Sure, you think turning your kid into an 8-legged puffy pink pillow with 0% mobility (albeit 80% protection from bumps and falls) is precious and...

Um. Aside from the fact that that cat's sitting politely and perfectly still on a human hand, I can't even tell it's a custom stuffed pet replica, and not just a, like, pet...

Bow-Wow, Squeak, Squawk, Meow. I know. I forgot Ssssss, Ribbit, and Cocka-doodle-doo in my noisy intro to pet gifts for 2021. But that's not because I don't care for snakes, frogs, and roosters, just because I happened...

Feel like throwing your controller or smashing your console? Grab a SEGA Genesis Interactive Plush and take out your aggressions on its smooshy controller and pillowy, 16-bit system instead...

iFetch isn't the first automatic ball launcher for dogs, but it's about half the cost of the Go Dog Go, and I am more partial to iFetch's video of the dancing Boston Terrier than I am to Go Dog Go's of the spastic Puggle...