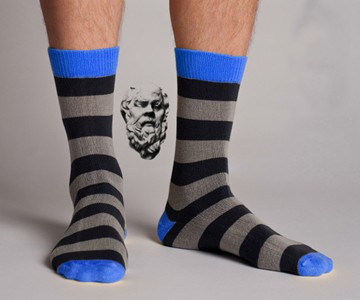 Much like the AdrenaSuit Socrates Everlasting Socks, or SocSocks, employ a military grade Kevlar|Carbon Matrix that will render you impenetrable. OK fine, it will just render the socks impenetrable. But still, a pair of foot koozies guaranteed never to get a hole, droop, or wear out on the bottom is pretty damn cool. And thanks to Cam Carter, they're not an April Fool's joke.

Two things led to Carter's design of the Socrates Socks: his stint in the American military, where he gained access to declassified military technology, and his stationing in Milan, Italy, where he learned that men's fashion, even for hardcore Dudes, can be more than another F-word. Live on Kickstarter through November 3, 2012, and already beyond their $10,000 funding goal, SocSocks employ the first business-casual application of Kevlar. They are for people sock and tired of high turnover rates due to toe holes, degraded elastic, or worn-to-translucency heels and foot pads. Socrates Socks are strong and resilient like an ox, yet still soft and comfortable like the fleece of Mary's little lamb.

Socks are available in two styles and multiple colors. The Attica has a solid tan body with hued toes and tops. Color choices include lime green, bright blue, black, and beige. The Xeno sports black and tan horizontal stripes over the shin and foot, and also has colored toes and tops in either bright blue, purple, or lime green. Pledge amounts start at $30 for two pairs in the buyer's choice of style and color. For $65, you get 4 pairs, plus a Socrates handkerchief. Estimated delivery date is November 2012. SocSocks has partnered with local small businesses for the production run's raw materials, manufacturing, and packaging, ensuring the complete creations, in all their Kevlar and carbon fiber glory, are made in America.

November 2013 Update: Despite a very successful crowdfunding run, Socrates socks, like many over-funded or poorly manage Kickstarter campaigns, have been plagued with problems and delays. At printing they had neither been released for public sale, nor had project backers received the socks for which they contributed pledge money.

Too stoic to wear your heart on your sleeve? Then wear your frontal lobe on your Bieber side-swept bangs! The "brainchild" of a self-proclaimed starving medical student, this clever, kitschy knitting pattern will earn...

What is a man of style? Gucci suits and Rolex watches, or a dude who sports more unique men's fashion and accessories? Whether you're the kind of guy who likes to dress ready for the runway in tailored pants and fresh-pressed...

Building my own watch with one of Rotate's All-In-One Watchmaking Kits sounds like quite the accomplishment. I'd be very pleased with myself, and wear that watch until the end of time, if I did that. "If" being the key...

When indecision strikes or words fail you, let fate decide the most appropriate way to F the situation. This enamel pin secures to your lapel where it will always be within finger's reach and ready to spin-a-fuck the...

From theory to practice. The new Big Bang MP-11 Red Magic Watch from Hublot is about to blow up in a limited edition of 100 pieces for all you mega rich kids out there who prefer horology to cosmology. With its fiery...

Place your trust in the double-jointed jaw of the crocodile, and it will clamp down on your belt loop, your backpack strap, or your friend Cornelius' nose on a dare with an uncompromising 3,700 pounds per square inch...

Are you ready to let the tentacles of time ensnare your wrist? The HM7 Aquapod is luxury watchmaker MB&F's jellyfish-inspired wristwatch. What's so jellyfishy about this timepiece? Well...not much, unless you're willing...

Gerber's Barbill wallet looks like it has a pair of butterfly wings that slide out from either side of its elastic band center. Maybe to communicate that, despite the sturdy look and feel of the wallet's stainless steel...