Vintage Board Game: Run Yourself Ragged 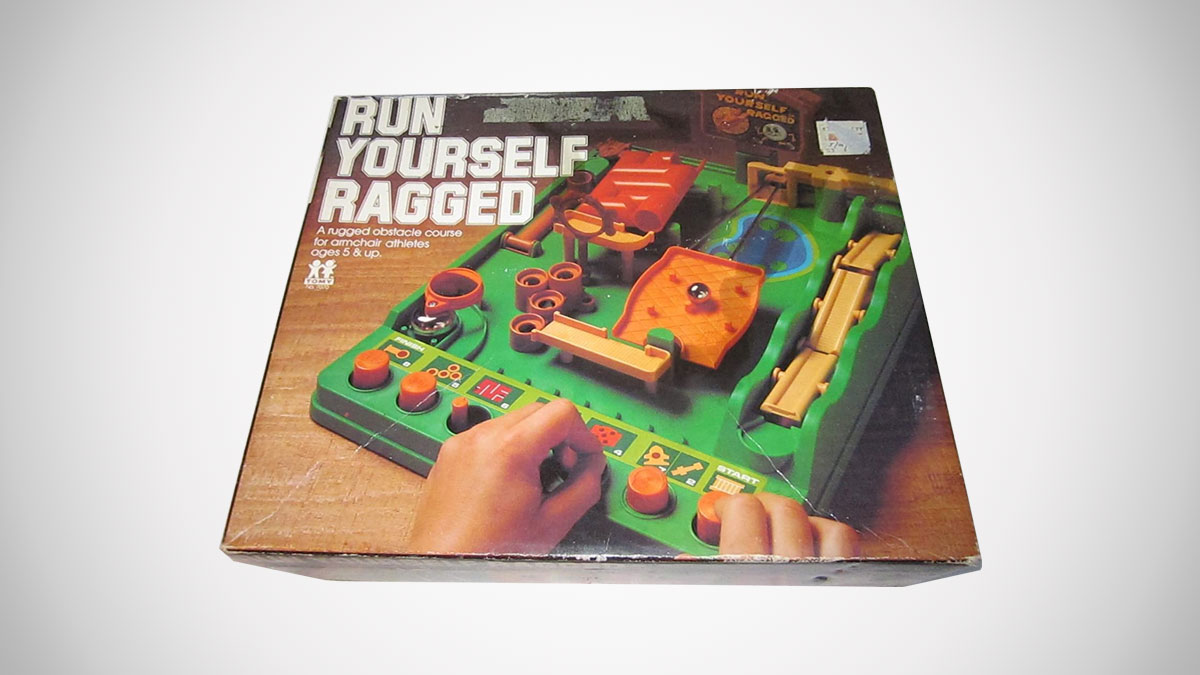 Hi. I was trying to think of this game the other day where you finger chaperoned a lead ball through a series of man made, plastic obstacles, and then slammed the ball down as hard as you could on a bell. Could not think of it to save my bacon. Then my girlfriend decided she'd try and make me feel like a gigantic piece of shit by announcing she was going for a run. I told her, "Don't run yourself ragged." And here we are.

Well, not quite yet, first, I went on the internet and searched and found that they actually make a new shitty looking version (it's exactly the same) of the game, but they're calling it...get this... TOMY Screwball Scramble Games for Kids ($22). Now that is a dumb fucking name (DFN). I'm not interested in playing that game even if it is $133 less than the retro classic being offered by this fine Etsy seller. And while $155 for an old board game seems extravagant, you watch, some rich middle aged mother fugger will buy this reminder of childhood within the next week.

Trekking the National Parks Board Game

So many national parks, so little time to hike and camp and do #2s (and then bury them like a responsible nature lover) in them all. Well fret not, my dudes and ladies, because even if you can't hop in the Sprinter Van...

Level Up Board Game Platform

Level Up. The perfect name for a modular platform with 6" legs set on your tabletop to, in every sense of the word, elevate your board, card, and role-playing games...

For poker card deals, Cards Against Humanity handovers, and D&D dice rolls, the Game Night Table Topper endeavors to make your board and deck interactions smooth and free of bumps and creases. Plus keep the table underneath...

I don't know if Carps & Angsty Manatee is the best unofficial expansion set for Cards Against Humanity, but having played with it last weekend, I can attest to its being a damn good one. It's also a loaded deck, with...

Just when I thought the suspense couldn't get any worse...or the wait any longer...than it is just watching the kings, avengers, enterprisers, and power hungry on Game of Thrones the series fight to control Westeros...

If you still need a bitchin' gift for the kids from Stranger Things, here you go, the Board Game Tower Backpack from ENHANCE. They'll probably make Will carry it, and the little oddball will certainly succumb to its 23"...

Sling Puck can teach us a life lesson about compromise, kids. Maybe Mama and Pop told you no firing slingshots in the house. And then when you put down your pellets and Pocket Shot and picked up your puck and stick, they...

Playing board games and sharing a meal seem like two of the very few activities people of all ages still like to do that involve, real, face-to-face, technology-free human interaction*. And BoardGameTables.com is doing...

Deadwood: The Board Game

"Welcome to fucking Deadwood!" Al Swearengen's curse-filled rants in HBO's short-lived and too-soon-ended series Deadwood were a poetic introduction to the gold rush of the mid to late 1800s. And as the final season rushed...